Control of Nitrous Oxide During Cryosurgery 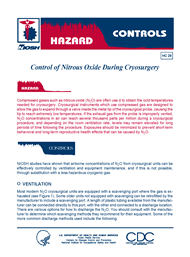 Compressed gases such as nitrous oxide (N2O) are often used to obtain the cold temperatures needed for cryosurgery. Cryosurgical instruments which use compressed gas are designed to allow the gas to expand through a valve inside the metal tip of the cryosurgical probe, causing the tip to reach extremely low temperatures. If the exhaust gas from the probe is improperly vented, N2O concentrations in air can reach several thousand parts per million during a cryosurgical procedure; and depending on the room ventilation rate, levels may remain elevated for long periods of time following the procedure. Exposures should be minimized to prevent short-term behavioral and long-term reproductive health effects that can be caused by N2O.

NIOSH studies have shown that airborne concentrations of N2O from cryosurgical units can be effectively controlled by ventilation and equipment maintenance, and if this is not possible, through substitution with a less hazardous cryogenic gas.

Exhaust Directly to Outdoors: Since the gas is under considerable pressure, the discharge end of the tubing can be exhausted directly outdoors. This can be accomplished by placing the end of the hose out of a window or attached to a pipe placed through a wall or ceiling to the outdoors. Care should be taken to ensure that the discharge location is not an area where people are normally present or in close proximity to an outside air intake or window where N2O could re-enter the building.

Exhaust into a Nonrecirculating General Ventilation System: If a nonrecirculating general ventilation system is present, the hose can be placed up in an exhaust air vent and the N2O will be discharged out of the building. Care should be taken to ensure that the hose is placed far enough into the duct system to prevent N2O from re-entering the room. To make sure that it is not, air monitoring should be conducted. Discharge hoses should not be placed in recirculating general ventilation duct work since this could distribute the N2O to other areas of the building.

Exhaust to Vacuum Scavenging System: In some instances, the discharge hose can be hooked to a vacuum system for removal of the N2O. A qualified individual should determine if an existing waste anesthetic gas disposal system or a medical-surgical vacuum source can be used for this purpose. The high exhaust flowrates from some cyrosurgical units (up to 90 liters per minute) may be greater than the capacity of the vacuum system or leave minimal vacuum capacity for other parts of the system. Due to the high gas pressure, a specially designed interface may be needed between the vacuum system and the cryogenic scavenging tube to prevent back pressurization. Since N2O is an oxidizer, its corrosive effect on vacuum system components and compatibility with materials and lubricants used in the vacuum system should also be considered.

Even with a proper scavenging unit, leaks can occur that can cause high levels of N2O in the work area. The equipment manufacturer should be consulted to determine what routine maintenance is necessary for the particular cryogenic unit. Periodic leak testing of all fittings and connections should be conducted to ensure this source of exposure is minimized. A direct reading N2O monitor or a soap solution can be used for this purpose.

If scavenging is not possible, the user should consider substitution of carbon dioxide (CO2), which can also be used as a cryogenic gas on many of the cryosurgical units. CO2 is considered less hazardous and has a much higher airborne exposure limit than N2O. However, since it does not cool as low as N2O (-79 °C for CO2 vs. -89 °C for N2O), it will likely require longer freeze times. The cryosurgical unit manufacturer should be consulted for guidance regarding the use of CO2 with their equipment. Additionally, experts in the medical field should be consulted concerning the implications of changing to CO2 as the freeze agent as this may not be a medically viable option in all cases.

The principal contributors to this publication are William J. Daniels, Charles S. McCammon, and Jerome P. Flesch of NIOSH and Lee Shands, Indian Health Service. The drawing is by Dick Carlson. Desktop publishing was provided by Kristina Dragon and Susan Kaelin.

This document is in the public domain and may be freely copied or reprinted. NIOSH encourages all readers of this HAZARD CONTROLS to make it available to all interested employers and workers.