WARNING! Workers may die or be injured if scaffold equipment and fall protection systems are defective or misused.

The National Institute for Occupational Safety and Health (NIOSH) requests assistance in preventing worker injuries and deaths caused by falls from suspension scaffolds. “Suspension scaffold” means one or more working platforms suspended by ropes or other means from an overhead structure. Recent investigations by NIOSH suggest that fatal falls occur as a result of defective scaffold equipment, improper installation or operation, improper training of workers, or a failure to use appropriate personal fall protection equipment. This Alert describes five incidents resulting in six deaths caused by falls from suspension scaffolds.

Safety regulations of the Occupational Safety and Health Administration (OSHA) establish specific requirements for suspension scaffolds and their operation, including the use of fall protection systems(Figure 1) [see note 1]. Every employer, supervisor, and worker involved in work from suspension scaffolds must comply with these regulations. NIOSH requests editors of trade journals, safety and health officials, and employers in the construction trades to bring the recommendations in this Alert to the attention of construction supervisors and workers. 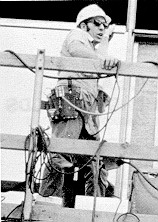 Falls from scaffolds accounted for 21% (82 of 386 incidents and 86 deaths) of fatal falls from working surfaces reported for the period 1974 to 1978 [OSHA 1979]. Suspension scaffolds were involved in 30% (25 of 82 incidents and 27 deaths) of the falls from scaffolds. Of the 25 falls from suspension scaffolds, 68% (17) involved scaffold equipment failure. Personal fall protection equipment was used in only three of these incidents, but it was used improperly in each case. In one incident, a worker fell out of his improperly fastened safety belt; in the other two incidents, excessively long lanyards broke or separated after victims fell 30 feet.

OSHA regulations were promulgated in 1971 to protect workers from the hazards of working from scaffolds in both general industry [29 CFR 1910.28–see note 2] and the construction industry [29 CFR 1926.451]. However, falls from scaffolds continued to occur, and in 1986, OSHA proposed to revise the construction industry safety regulations addressing all types of scaffolds [51 Fed. Reg. 42680 (1986)–see note 3].

The proposed regulations provide general requirements for all scaffolds regarding capacity, construction, access, use, and fall protection. In addition, they include provisions for the following:

OSHA has scheduled final action on the proposed regulations for scaffolds and fall protection systems in 1992 [Occup Saf & Health Rep 1992].

The NIOSH Fatal Accident Circumstances and Epidemiology (FACE) Program has been investigating fall-related fatalities among workers since October 1988. The following subsections present findings from five case reports of falls from suspension scaffolds that resulted in the deaths of six workers.

On November 15, 1988, a 53-year-old male painting foreman and a 28-year-old male painter died when the scaffold from which they were working collapsed, causing them to fall nearly 48 feet to the ground. The men were painting the exterior of a 48-foot- high, 56-foot-diameter storage tank. They were painting the side of the tank from a two-point suspension scaffold supported by two steel outriggers. The scaffold manufacturer specified 600 pounds of counterweight for this scaffold and load, but the painters had rigged the scaffold using only 200 pounds of counterweight (100 pounds per outrigger). The outriggers were not tied off or otherwise secured.

No personal fall protection equipment was being used by either worker. While the two men were working on the scaffold, their weight caused the outriggers to slip, and the scaffold, rigging, and victims fell to the ground [NIOSH 1989c].

Case No. 2–One Death

On December 19, 1988, a 27-year-old male cement finisher died when he fell from a suspension scaffold and his safety lanyard snapped. The victim and a coworker were dismantling suspended scaffolding at the 160-foot level inside a 172-foot-high, circular concrete silo. Both men were wearing safety belts with nylon rope lanyards secured to independent lifelines.

The accident occurred when the victim lost his balance and fell off an unguarded end of the scaffold. The coworker stated that he saw the victim fall and jerk upward as the lanyard caught him. When the victim’s weight dropped back on the lanyard, it snapped, allowing him to fall onto a concrete floor.

Examination of the lanyard after the event showed burn damage at several places, including the point of failure. The employer did not control inspection or distribution of this fall protection equipment. Instead, the equipment was kept in a common supply bin where the workers could readily obtain it when needed and return it when work was completed. The lanyard had been returned to the storage bin even though it had probably been damaged earlier during cutting and welding operations [NIOSH 1989b].

Case No. 3–One Death

On March 15, 1989, a 33-year-old male caulking mechanic died when the scaffold on which he was working failed and caused him to fall 60 feet to the ground. The victim and a coworker were caulking the exterior skin plate joints and windows of a new seven-story building. Most of the work on the lower levels of the building had previously been completed using a personnel hoist. The upper floors of the building could not be reached with this device, so the crew brought a suspension scaffold to the site on the day of the incident.

When work was completed at the sixth floor, the men began their descent. Suddenly, the victim’s end of the scaffold dropped to a vertical position. The victim fell from the scaffold to the ground 60 feet below. The second man on the scaffold (the window washer) managed to cling to the scaffold and a nearby window ledge until he could be rescued.

Inspection of the scaffold hoist revealed a defect in a centrifugal safety brake. This defect and the victim’s possible failure to release the parking brake before beginning his descent caused one end of the scaffold to drop [NIOSH 1989a].

Case No. 4–One Death

On October 21, 1989, a 37-year-old male painter died when the platform he was working from fell 65 feet inside a municipal water storage tank. The victim was a member of a three-man crew that was using an improvised suspension scaffold to paint the interior of the 68-foot-tall, 32-foot-diameter water tank. The scaffold consisted of an aluminum ladder used as a platform and secured to steel “stirrups” made of steel bar stock bent into a box shape and attached to each end of the ladder. Wire cables from each stirrup ran to a common tie-off point. A cable from this common tie-off was rigged to a block and tackle used from ground level to raise and lower the platform. The block and tackle supporting the system was secured to a vertical steel pipe on top of the tank with a cable that was fashioned into a loop by U-bolting the dead ends of a piece of wire rope.

The victim had been painting from one end of this scaffold while wearing a safety belt and lanyard attached to an independent lifeline. When the victim finished painting, he unhooked his lanyard from his lifeline and moved along the ladder platform to a position where he could hand his paint spray gun to the foreman (who was at the top of the tank). As the foreman took the spray gun, he heard a “pop” and saw the scaffold and the victim fall 65 feet to the floor of the tank.

Investigation of the incident revealed that the two U-bolts on the loop of cable supporting the block and tackle had loosened enough to allow the cable ends to slip through, causing the scaffold to fall. This particular rig had been used without incident every day for 2 weeks preceding this fatal fall [NIOSH 1990a].

Case No. 5–One Death

On November 20, 1989, a 39-year-old painter died after falling 40 feet when a scaffold suspension rope broke. This victim was a member of a three-man crew engaged in the abrasive blasting and painting of the interior of a 48-foot-high, 30-foot-diameter steel water tank.

Three separate two-point suspension scaffolds were used to reach the interior walls of the tank. The scaffolds abutted each other in a U-shaped configuration. The center scaffold platform was overlapped by one end of each of the other two scaffolds. Suspension ropes were located at each end of the center platform and at the outer ends of the two other platforms. The platform unit was raised by alternately raising each suspension point a few feet at a time.

An investigation revealed that the 5/8-inch nylon hoist rope had broken at a point where it had been burned some time before the incident [NIOSH 1990b].

None of the deaths described here would have occurred if the existing and proposed OSHA regulations for the safe use of scaffolds had been observed.

These recommendations are discussed briefly in the following subsections. Please note that an earlier NIOSH Alert [NIOSH 1991b] presents recommendations for preventing electrocutions during work with scaffolds near overhead power lines.

Employers and workers must comply with the current OSHA regulations for working with scaffolds [29 CFR 1910.28, 1926.451]. Furthermore, they should

Design and Construction of Scaffolds

The design and construction of scaffolds must conform with OSHA requirements concerning type of equipment, rated capacities, construction methods, and use. Each scaffold and scaffold component must be capable of supporting its own weight plus at least four times the maximum intended load without failure. Each suspension rope must be capable of supporting at least six times the maximum intended load.

Such ropes should be made from material that is not adversely affected by heat or by acids or other corrosives.

Employers should require a competent person to inspect all scaffolds and scaffold components for visible defects before use on each workshift. Scaffolds should be erected, moved, dismantled, or altered only under the supervision of a competent person.

All components of personal fall protection equipment (including body belts or harnesses, lanyards, droplines, trolley lines, and points of anchorage) should be inspected by a competent person before use. Any visibly damaged or worn equipment should be removed from service immediately.

Use of Fall Protection Equipment

Use of Structural Members as Anchor Points

Structurally sound portions of buildings or other structures must be used to anchor droplines for body belt or harness systems and tiebacks for suspension scaffold support devices. Droplines and tiebacks should be secured to separate anchor points of structural members. Owners, architects, and engineers planning renovation or designing new facilities should incorporate strategically located anchor points on structural members of buildings for future exterior maintenance and repair work.

Employers should provide workers with proper training, including the manufacturers’ recommendations for installing and operating suspended scaffold systems and for using personal fall protection equipment. Untrained personnel should never be permitted to work from any type of suspension scaffold.

We greatly appreciate your assistance, which is crucial to protecting the lives of American workers.

4. Type I guardrail systems are those capable of providing adequate fall protection without the use of body belts. [Return to main text]

BLS [1988]. Occupational injuries and illnesses in the United States by industry, 1986. Washington, DC: U.S. Department of Labor, Bureau of Labor Statistics, Bulletin No. 2308.

51 Fed. Reg. 42680 [1986]. Occupational Safety and Health Administration: safety standards for scaffolds used in the construction industry; notice of proposed rulemaking. (To be codified at 20 CFR 1926).