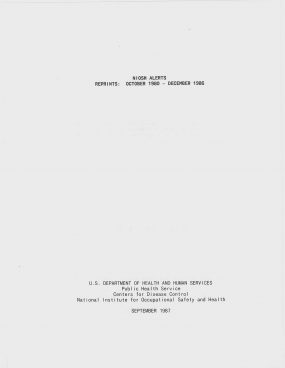 A total of 13 NIOSH Alerts which have been published since 1980 were reprinted in this volume as a convenience to those wishing to have a complete series. Hazards dealt with in these Alerts included: 2- nitropropane (79469); benzidine (92875), o-tolidine (119937), and o- dianisidine (119904) based dyes; controlling carbon-monoxide (630080) hazard in aircraft refueling operations; electrocutions of workers in fast food restaurants; injury of workers by robots; electrocutions from contact between cranes and power lines; deaths and injuries from excavation cave ins; hazards in the use of water spray or fog streams to prevent or control ignition of flammable atmospheres; occupational fatalities in confined spaces; grain auger electrocutions; fatalities due to fires and explosions in oxygen limiting silos; electrocutions due to damaged receptacles and connections; and fatalities of workers contacting electrical energy. These Alerts were reprinted exactly as they first appeared and therefore contained no updated material which may have become available since that time.