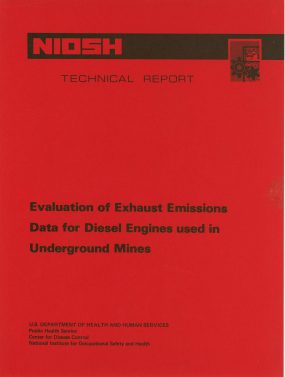 Exhaust emissions data for diesel engines used in underground mines was evaluated. Diesel exhaust pollutants evaluated were nitrogen- oxide (10102439) (NO), carbon-monoxide (630080) (CO), and carbon- dioxide (124389) (CO2). The pollutants were collected from 4,6,8, and 12 cylinder indirect injection engines prior to installation of any emission control device. NO emissions ranged from 3.8 to 6.0 grams per brake horsepower hour (gm/bhphr). The lowest NO emissions were from the 6 cylinder engine, and highest emissions were produced by the 8 cylinder engine. The number of engine cylinders had only a small effect on emission concentrations. CO2 exhaust emissions ranged from 580 to 812gm/bhphr. Average CO2 emissions from the turbocharged aftercooled (TA) engines were 21 percent lower than from the naturally aspirated (NA) engines, and the methane (74828) atmosphere slightly reduced CO2 emissions. CO emissions ranged from than CO emissions from any of the NA engines. The number of engine cylinders had a slight effect on CO emissions. The author recommends that since exhaust emission concentrations vary among diesel engines with similar fuel injection systems, air intake systems, and numbers of cylinders, several makes and models of engines should be used when testing the effectiveness of emission control devices.