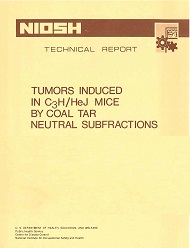 The biologic activity of seven coal tar neutral subfractions derived from coke oven effluents was investigated. A solution of each subfraction was prepared in toluene (108883) at a concentration of 50 milligrams per milliliter. A 100 microliter volume of each solution, containing 5 milligrams of the test material, was applied twice weekly to the clipped interscapular area of mice for a maximum of 26 weeks. Controls were treated with toluene only. Mice were examined daily for evidence of systemic toxicity, mortality, and tumors. All surviving animals were sacrificed and autopsied 2 week after completion of treatment. Neoplasms developed in the interscapular skin area of some of the mice treated with four of the seven materials. Squamous cell papillomas were present in mice treated with subfractions 7, 9, and 13, and squamous cell carcinomas were observed in animals receiving subfractions 9 and 10. The two subfractions that induced squamous cell carcinomas were shown by gas chromatographic/mass spectrometric analyses to contain many 4- and 5- ring polynuclear aromatic hydrocarbons, some of which are known to be carcinogenic.