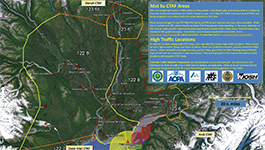 Aviation is a basic mode of transportation in Alaska. Alaska has six times as many pilots per capita and 16 times as many aircraft per capita when compared to the rest of the United States.1 There are approximately 736 registered landing areas, in addition to the thousands of lakes and gravel bars where pilots land.3 Hazards can exist on the ground when aircraft are taking off or landing, and also in the air when sharing congested airspace.

During 2011 there were three mid-air collisions in Alaska. One of these collisions occurred in the Matanuska- Susitna (Mat Su) Valley between two seaplanes, fatally injuring four people. In response, the Mat Su Mid-Air Collision Avoidance Working Group was formed with representatives from industry, the military, the Federal Aviation Administration (FAA), Aircraft Owners and Pilots Association (AOPA), Alaska Airmen’s Association, the Alaskan Aviation Safety Foundation, the Alaska Air Carriers Association and the National Institute for Occupational Safety and Health (NIOSH). Mapping of Common Traffic Advisory Frequencies (CTAFs), which are the frequencies used by pilots to communicate while operating near an airport without a control tower, in the Mat Su Valley showed a substantial amount of overlap; pilots in an area could be on separate, but correct frequencies and therefore unable to communicate with each other. In addition, there were disparities between various sources of radio frequency information, including the FAA’s Alaska supplement, flight charts, and individual airport listings.

As a partner in the Mat Su Mid-Air Collision Avoidance Working Group, NIOSH analyzed data from FAA and Aviation Safety Reporting System databases and found very little overlap in reports of near misses and near mid-air collisions from Alaska. Alaska pilots were surveyed and locations of high traffic areas in the Mat Su Valley were identified. Radar data from air traffic control was reviewed to determine common traffic routes. Several scenarios were developed to clarify communication confusion; these scenarios were reviewed and evaluated by local pilots, commercial operators, flight instructors and airport operators.

A set of recommendations for CTAF areas was developed and submitted to the FAA, and these recommendations were accepted; changes went into effect on May 29, 2014. The new CTAF areas eliminate confusion from overlapping frequencies assigned to adjacent airports. CTAFs designate frequencies to use when pilots are not in contact with air traffic control or a Flight Service Station. Seventy-eight airports had their frequencies changed, 36 airports were assigned CTAFs for the first time. The new frequencies can be found in flight charts and in individual airport listings in the FAA’s Alaska Supplement, along with a diagram of the CTAF areas. NIOSH assisted in development and dissemination of maps showing the frequency boundaries, highlighting the new information through informational stickers on the cover of the new Alaska Supplement, and through continued presence on Hangar Flying, a weekly aviation feature hosted by the Alaskan Aviation Safety Foundation. Maps showing the new CTAF boundaries were distributed statewide and were posted in areas used by pilots, such as flight service stations. Information is also listed on the FAA’s website: www.faa.gov/go/flyalaskaexternal icon.

NIOSH researchers will analyze feedback from pilots using the new frequencies and use this information to provide recommendations to the FAA to refine the CTAF areas as needed for improved safety. NIOSH will continue to monitor crashes and near misses in this area.

For more information on the CTAF projectexternal icon visit: www.faa.gov/go/flyalaska