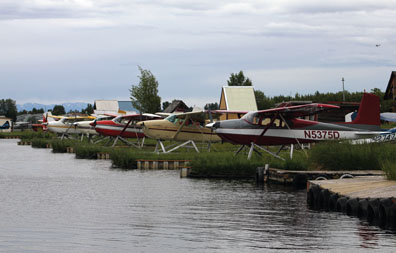 Floatplanes in their slips at Lake Hood, Anchorage, Alaska. Photo courtesy of NIOSH.

During the 1990s, Alaskan workers faced an occupational fatality rate over three times the national average.1 Aircraft crashes were the second leading cause of occupational deaths in Alaska during this period.2 Commercial pilots in Alaska had an occupational fatality rate of 410 deaths per 100,000 workers — five times greater than the rate for all U.S. pilots and nearly 100 times greater than the rate for all U.S. workers.3 In 2000, the U.S. Congress funded the Alaska Interagency Aviation Safety Initiative (AIASI) with the goal of decreasing occupational aircraft crash fatalities in Alaska in half by 2010.

The AIASI was a multifaceted public health approach that focused on air taxi and commuter operations and preventing crashes that were the result of controlled flight into terrain (CFIT). CFIT is the act of flying an airworthy, pilot-controlled aircraft into mountains, water or other terrain. Research had identified CFIT as a frequent cause of aviation-related fatalities, especially in situations in which a pilot departed in good visibility conditions but continued into areas of reduced visibility or poor weather.

The AIASI consisted of several components that were supported by federal agencies and industry. National Institute for Occupational Safety and Health (NIOSH) research guided the initiative, identifying risk factors and focus areas, conducting a statewide survey of air taxi and commuter operators and pilots, and evaluating the success of safety interventions and regulatory changes. The National Transportation Safety Board was responsible for crash investigations and providing probable cause. The AIASI also launched programs to educate and promote safety among businesses, pilots, and their customers, including the Federal Aviation Administration’s (FAA) Circle of Safety and the Medallion Foundation which was developed by the Alaska Air Carriers Association to improve the safety culture in the aviation industry. The FAA and the National Weather Service worked together to install more than 100 weather cameras across the state and launched a program to provide real-time weather information to pilots via radio. The FAA equipped hundreds of aircraft with Capstone navigational equipment. These interventions and accompanying technology are applicable beyond Alaska: the FAA’s NextGen air transportation system is based on technology that was tested in Alaska as part of the AIASI’s Capstone Program.6

The efforts of the AIASI resulted in reductions in numbers and rates of crashes and fatalities in Alaska air taxi and commuter operations. Although all nonmilitary aviation operations showed a significant rate decrease, the greatest improvements were seen in fatal air taxi and commuter crashes. There was also a marked decline in CFIT crashes between 2000-2009 compared to the prior decade.4

While hazards have been reduced, collaborative efforts are still needed to continue to improve the safety of occupational pilots and passengers in Alaska. During the survey conducted as part of the AIASI, NIOSH found that air taxi and commuter operators in Alaska with high crash rates had pilots who worked on average ten hours more per week than those working for operators without high crash rates.7 NIOSH researchers continue to conduct surveillance, work with government agencies and industry to develop and evaluate interventions, and identify new areas of focus for prevention efforts. Current work includes development of training tools to prevent pilot fatigue.

Visit the NIOSH Web site (www.cdc.gov/niosh) for more information about aviation safety in Alaska. The study, A Multifaceted Public Health Approach to Statewide Aviation Safety, was authored by Nicolle A. Mode, Mary B. O’Connor, George A. Conway, and Ryan D. Hill, and was published in the American Journal of Industrial Medicine 55:176-186 (2012).