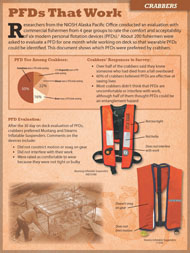 Falling overboard is the second leading cause of death among commercial fishermen nationwide. Of the 182 fishermen who died from falls overboard between 2000 and 2011 NONE of them were wearing a personal flotation device (PFD). Researchers from the NIOSH Alaska Pacific Office conducted an evaluation with commercial fishermen from 4 gear groups to rate the comfort and acceptability of six modern personal flotation devices (PFDs). About 200 fishermen were asked to evaluate a PFD for one month while working on deck so that wearable PFDs could be identified. This document shows which PFDs were preferred by crabbers.