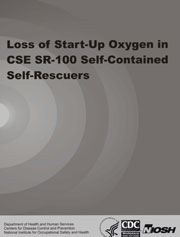 This report describes the results of an investigation carried out jointly by the National Institute for Occupational Safety and Health (NIOSH) and Mine Safety and Health Administration (MSHA) to assess the prevalence of a lack of sufficient start-up oxygen in CSE SR-100 self-contained self-rescuer (SCSR) devices.

The investigation was designed to test field-deployed CSE SR-100 SCSRs to determine the extent of oxygen cylinder failures in the population of approximately 70,000 units deployed in underground coal mines. NIOSH and MSHA collected and tested the oxygen cylinders from 500 field-deployed units in order to determine if the defect rate among the deployed units was less than 1%. To have 95% confidence that the defect rate was less than 1%, no more than three units in the 500-unit sample could fail the test. Five units failed the test. Therefore, the 1% maximum allowable failure rate under the protocol was not met.