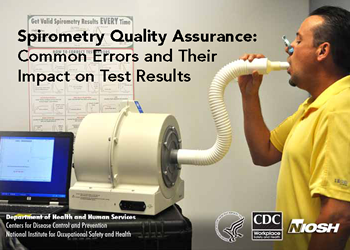 Spirometry is the most common pulmonary function test (PFT) and it plays a central role in occupational respiratory disease surveillance programs. Accurate spirometry testing, interpretation, and follow-up are critical to effective screening and surveillance of workers exposed to respiratory hazards and to the management of patients in the clinical setting.

Spirometry quality assurance includes examination of test values and evaluation of both the volume-time and flow-volume curves for evidence of technical errors. Technically poor spirometry may have little value and may even provide misleading information. When erroneous curves are detected, additional maneuvers are often needed. During testing, technicians should attempt to record a valid test, which is composed of at least 3 acceptable maneuvers with consistent (“repeatable”) results for both FVC and FEV1. Achieving repeatability during testing means that the difference between the largest and second largest values for both FVC and for FEV1 are within 0 .15 l (150 ml). Additional maneuvers can be attempted, up to a maximum of 8, to meet these criteria for a valid test. Even tests that have 3 acceptable maneuvers of which at least 2 are repeatable may not represent an individual’s maximum effort. Ideally, there should be 3 maximal effort curves with the same size and shape.