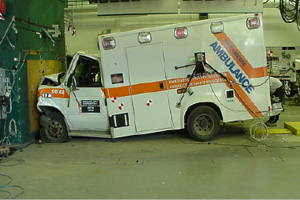 Motor vehicle accidents are the leading cause of work-related deaths in the United States. Between 2002 and 2007, an average of almost 1,400 U.S. workers died from roadway crashes each year; nearly all work-related deaths among ambulance service workers were due to transportation-related incidents between 2003 and 2006. The risk is even greater for emergency medical services (EMS) personnel whose time-urgent responses can themselves be hazardous. In fact, field investigators estimated that the fatality rate among EMS workers in 2002 was greater than 2 times the national average for workers in general.

As part of the National Occupational Research Agenda (NORA), researchers at the National Institute for Occupational Safety and Health (NIOSH) set out to reduce ambulance crash–related injuries and deaths among EMS workers. The Ambulance Crash Survivability Improvement Project addressed the layout and structural integrity of ambulance compartments, design of hardware, and occupant restraints. The project included an evaluation of both human and mechanical barriers to equipment access, as well as use of personal restraints.

NIOSH research has revealed a number of important factors involved in ambulance worker injuries and deaths. These risk factors include not using restraints and, consequently, striking patient compartment bulkheads, cabinets, shelves, and possibly even other occupants during a crash. Field investigators observed that in order to access supplies and perform patient care, EMS workers often ride on the squad bench without wearing a restraint. This practice enables them to lean forward, stand up, or change positions as needed. Investigators also noted that structural failures can be a contributing factor in adverse outcomes of EMS crashes. NIOSH crash tests revealed the possibility of head injury if a worker’s head strikes the cabinets located immediately above or behind them.

NIOSH partnered with the Ambulance Manufacturers Division of the National Truck Equipment Association (AMD) and the General Services Administration (GSA) to revise federal ambulance standards including increasing the head clearance for EMS workers above the seating positions, which effectively eliminates a significant source of head injury. In addition, NIOSH researchers are continuing to work with AMD and GSA on other recommendations that will improve occupational safety for EMS workers. These recommendations include the simultaneous use of lap and shoulder belts, as well as improvements in structural integrity to enhance the crash-worthiness of ambulances and crash-survivability of EMS workers. Suggestions for further structural improvements include redesigning and rearranging compartment seating and incorporating padding into ambulance patient compartments. These research-to-practice measures and collaborative efforts will improve the safety of EMS crew members in their mission to save the lives of others.