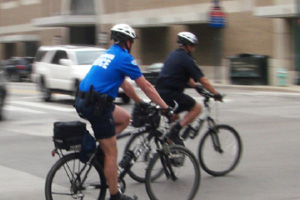 About 40,000 workers in public safety occupations ride bicycles as part of their job including police officers, security staff, and emergency medical providers. Research has shown that workers who ride as part of their job may be at risk for genital numbness or more serious sexual and reproductive health problems as a result of pressure in the groin area from the traditional (nosed) bicycle seat. These traditional seats have been associated with urogenital paresthesia (i.e., tingling, itching, burning) and sexual dysfunction in bicycle patrol police officers.

In recent years, the National Institute for Occupational Safety and Health (NIOSH) has conducted several research studies demonstrating the effectiveness of no-nose bicycle seats in reducing pressure to the groin and improving the sexual health of male bicycle patrol police officers. A no-nose bicycle seat does not have any material that protrudes between the thighs of the cyclist, and is designed to reduce or eliminate compression of the nerves and arteries located forward of the bones on which the cyclist sits. A traditional seat has a narrow nose that protrudes under the groin as the cyclist straddles the bicycle that supports part of the person’s weight where the groin contacts the seat’s nose, which can compress the nerves and arteries.

In one study, NIOSH provided no-nose seats to bicycle patrol officers from 5 metropolitan areas to use over a 6 month period. Results showed a marked reduction in pressure to the groin by at least 65% and significant improvements in penis tactile sensation and erectile function. The percentage of men who reported not experiencing urogenital paresthesia while using the no-nose seat for a period of 6 months rose from 27% to 82%. Ninety-percent of bicycle officers who tried the no-nose seat were still using it 6 months later. In addition, one participating police department ordered 400 no-nose seats following the study. NIOSH recommends that workers who ride a bicycle as part of their job take the following steps to help prevent sexual and reproductive health problems.

Visit www.cdc.gov/niosh for more information about research efforts to protect the safety and health of bicycle patrol officers (NIOSH publication number 2009-131). Authors of Cutting Off the Nose to Save the Penis—Steven Schrader, Michael Breitenstein, and Brian Lowe; Division of Applied Research and Technology; NIOSH—received the 2009 Alice Hamilton Award in the Human Studies category.