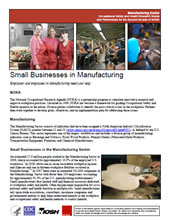 An estimated 15.9 million people worked in the Manufacturing Sector in 2008, which accounted for approximately 10.9% of the employed U.S. workforce. In 2008, about one in seven recordable workplace injuries and illnesses and one in thirteen workplace fatalities occurred in Manufacturing. In 2007 there were an estimated 302,836 companies in the Manufacturing Sector with fewer than 100 employees, accounting for approximately 91.4% of the U.S. manufacturing establishments. Small manufacturers face limited staff and financial resources dedicated to workplace safety and health.