The Long Road to America – One Refugee’s Experience 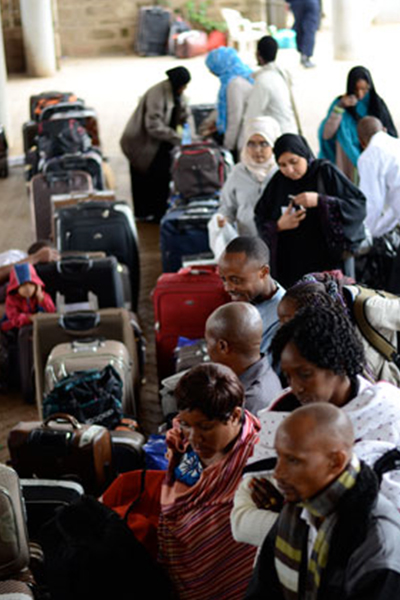 Refugees lining up with their suitcases – all their worldly possessions – as they get ready to board a plane for their new homes in the U.S.

The journey to migrate to the United States can be a long hard road for most refugees and immigrants. Each year, close to 50,000 refugees and 500,000 immigrants come to the United States from around the world to start a new life. CDC’s Division of Global Migration and Quarantine (DGMQ) makes it a top priority to ensure they are healthy upon arrival to the U.S. DGMQ accomplishes this through domestic and overseas programs, and public health interventions such as vaccinations, mandatory health screenings and parasitic treatment programs. By focusing and improving the health of immigrants, U.S. bound refugees, and migrants, DGMQ works to keep infectious diseases and other diseases of public health significance from coming into and spreading in the U.S.

DGMQ’s Africa Regional Field Program in Kenya primarily works with refugees under consideration for resettlement in the United States. The program collaborates with the UN High Commissioner for Refugees (UNHCR) and other partners to improve the health of refugees. The program also works extensively with the International Organization for Migration (IOM) to oversee the medical screening of U.S.-bound refugees to prevent the spread of communicable diseases, and to ensure the number of panel physicians that can conduct health assessments of resettling refugees is sufficient.

Follow one refugee’s journey to the United States and learn how DGMQ works to protect and improve the health of immigrants, U.S. bound refugees, and migrants through domestic and overseas programs.

It is a chilly morning in Nairobi, Kenya, but adults and children alike are bundled up and waiting patiently with their suitcases. They are shuffled through the line to weigh and tag their luggage – all their worldly possessions – as they anxiously await their chance to board a plane and begin a new life in the United States. These families are used to waiting; most fled their homes in the 1990s and have been waiting year after year for the opportunity to resettle and make a permanent home again.

Many refugees can never return to their homeland; they would face continued persecution if they did. Some are also living in perilous situations or have specific needs that cannot be addressed in the country where they have sought protection. In such situations, they are settled in a third country, but the odds of resettlement are long. Of the 10.5 million refugees around the world, less than 1 percent will be relocated.

Amina, one of several members of this 1 percent at the IOM transit center in Nairobi, was pregnant when she started her long, winding, and arduous journey in October 1991 with her husband and 3-year-old son, Mohamed. She came from a village 30 kilometers outside Mogadishu in Somalia. After making their way to Mogadishu, her family traveled by car for 2 days to Kismayo. It took them another 4 days to cover the distance from Kismayo to Liboi, a town on the Kenyan border, on a road that translates to the “Curse of the Parents.” This stretch of road proved to be a curse twice over, as Amina’s infant son died of measles before they reached the border and her husband, returning along this road to reunite his sick mother with the family, was gunned down by a militia group just months before Kenya opened her borders to Somali refugees. Amina’s daughter, Sundes – born a few months later in the Utanga refugee camp on the coast of Kenya – would never know her father. 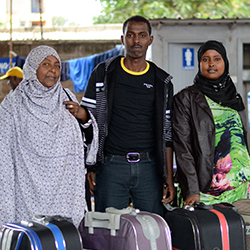 Amina with her two children Mohamed and Sundes

Amina moved her children again to another coastal refugee camp, Swaleh Nguru, but in March 1997, the ongoing tension between Kenyan villagers and the Somali refugees escalated. One day, when Amina left her children at the madrassa (a religious school) to go to the market, the locals set fire to the camp. Young Sundes and her older brother smelled smoke and ran 4 kilometers until they found a woman who used to buy goods from their mother and took them in. They were reunited with Amina the same fateful day, but others were not so lucky, as several of their friends were killed in the fires. 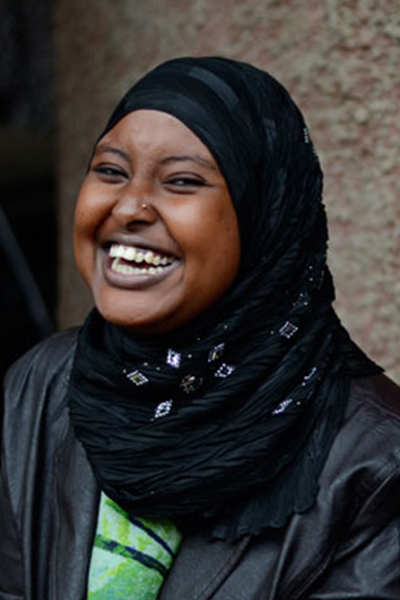 Sundes shares her excitement about a new life in America

The United Nations closed Swaleh Nguru and sent Amina and her family to the Kakuma refugee camp in the north of Kenya. When I asked her daughter, Sundes, what it was like to grow up in Kakuma, she shrugged and said, “I can’t complain – it’s life.” She went on to say that it’s stifling hot most of the year and while the refugees are given basic food staples, her mother always worked to buy extra food for the family. Her brother dropped out of school when he reached grade 7 and worked as a tea seller, loader, and waiter so she could attend a private school and get a better education.

Today is the Day: The Journey to the U.S.

Their lives are about to change drastically as they start yet another long journey – this time aboard an airplane en route to Kansas City. Their aspirations are no different from the immigrants who have for centuries sought a better life in the United States. Sundes would like to go to college and, having volunteered with FilmAid International in Kakuma, continue working in film. Mohamed would like to complete high school and work to support his family, while his mother wishes to learn English. Ultimately, however, “living safely is enough for now. Living in Kakuma, you don’t sleep sound at night. Locals come in at night and sometimes rob and shoot refugees. You wonder if someone will die tonight or the next.”

While Sundes is sorry to leave her friends behind, she is buzzing with excitement. This World Refugee Day she will not be performing in any plays in the camp, as she has for the past few years. She will be stepping off a plane, arm-in-arm with her brother and mother, to set down roots in a place where they hope they can finally find peace.

It is important to DGMQ that refugees such as Amina, Mohamed, and Sundes have access to medical care and preventive health services prior to arrival in the United States. This family will start their new lives in Kansas City healthy and, most importantly, happy.