From 2008 to 2014, 74 million passengers sailed on cruise ships in VSP’s jurisdiction. Only 129,678 passengers met the VSP case definition for AGE illness and only a small proportion of those AGE cases (1 in 10) were part of a norovirus outbreak.

The rate of AGE illness on cruise ships has decreased over time, as has the number and severity of outbreaks by year except 2012, when a new strain of norovirus emerged. 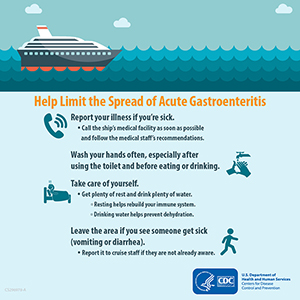 Fewer and less-severe AGE outbreaks on cruise ships are likely a result of several factors: