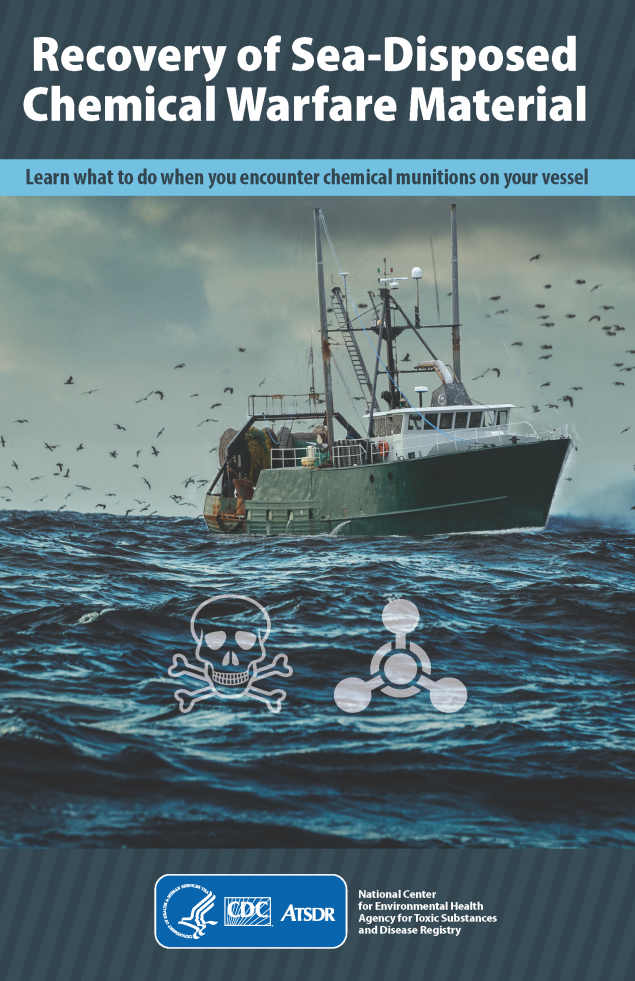 You dredged up a munition along with your catch. These munitions often contain warfare chemicals, and they can be encountered anywhere at sea, not just charted hazardous areas. The U.S. Army Technical Center for Explosives Safety provides guidance on how to RECOGNIZE, RETREAT from, and REPORT munitions at sea in their Munitions At Sea pamphlet.

Commercial fishing, clamming, and dredging operations should be prepared to respond when  munitions are brought up from the ocean. Vessels should prepare a munitions response kit of necessary supplies in advance and provide crew with appropriate training on how to protect themselves. Crew who perform jobs where catch or other items are brought up from the ocean should be trained on how to recognize munitions, properly handle munition, safely put on and remove personal protective equipment (PPE), decontaminate potentially contaminated surfaces, and recognize signs and symptoms of exposure.

Before the 1970s, disposal of excess, obsolete, or unserviceable munitions at sea was common. Sea-disposal operations included the disposal of conventional munitions of every type and chemical munitions with various chemical agent fills. Commercial fishing, clamming, and dredging operations can stir up these munitions and they can be encountered anywhere at sea, not just charted hazardous areas. There is now increasing concern about environmental and human health effects associated with the disposal of these agents both on land and in the ocean.

Centers for Disease Control and Prevention, along with other partners, developed tools for commercial fishermen encountering chemical munitions that will help identify personal protective equipment that be used to help prevent exposure, how to safely handle the munition, how to report the incident, and includes a resource card that can be taken with them to seek medical attention and is useful in the identification of signs and symptoms of exposure.

The tools were provided to industry and stakeholders, including NOAA, USCG, USFDA, and various state public and environmental health agencies that may become involved in the incidents.

Example of Burns and Blisters from Mustard Exposure

1. Isolate: You should keep unneeded crew members upwind and as far away as possible. The captain should steer the vessel into the wind to help minimize vapor exposure.

2. Decide on action: You should quickly decide if you will need to handle the munition. The longer the munition is exposed to ambient temperatures the more likely it is to leak. Beware of any leaking substances—vapors are toxic and liquids can cause burns. If crew members are not trained to properly handle munitions and how to safely wear PPE, or if you do not have the appropriate equipment, stop and request assistance from the U.S. Coast Guard on channel 16 (156.800 MHZ) or by calling (800) 424-8802.

3. Protect responding crew members: Crew members who are properly trained and will approach and handle the munition should wear appropriate PPE to protect their skin from leaking liquids. PPE should be put on (donned) in the following order:

4. Take action: Crew members trained to handle munitions should jettison or secure the munition as necessary.

5. Decontaminate: Decontaminate equipment and individuals that are potentially contaminated with liquid that leaked from the munition by physically removing the warfare chemical with soap and water. Make sure the wash solution and rinse water do not enter the vessel or come into contact with you or your coworkers. The wash solution and rinse water should be handled as hazardous waste and disposed of in accordance with applicable standards. Follow your company’s policy regarding how to determine when equipment is properly decontaminated.

6. Remove PPE: After handling the munition and decontaminating surfaces, remove PPE and place into sealed plastic bags. When removing PPE, the outer surface should be treated as potentially contaminated and care should be taken to not touch the outside surface, roll PPE downward, and avoid pulling PPE off over the head. Remove (doff) the PPE in the following order:

PPE should be disposed of in accordance with applicable standards.

8. Look: Look for symptoms. Symptoms can happen right away or up to 48 hours after exposure. Symptoms include sudden weakness, burning eyes, skin blisters, trouble breathing, redness, and burning skin. If you suspect you were exposed, go to the emergency room.

9. Protect the public: Follow your company’s policy regarding the catch. Fishing vessels that have come into contact with chemical agents must not bring their catch ashore until it has been checked and released by the appropriate state’s department of environmental health. Sea life contaminated by chemicals is unsuitable for human or animal consumption.

If jettisoning the munition, using a two person team to place munition in a plastic tote and lift to gunwale. You should toss both the tote and munition overboard.