U.S. chemical warfare agents are destroyed using incineration technology (five sites) or the Department of Defense’s (DoD) neutralization process (four sites). The U.S. stockpile of these agents was stored at nine sites, either in large containers or as assembled weapons and munitions. A chemical agent disposal facility was built at each site for use in destroying its individual stockpile.

Incineration is controlled ignition of materials that converts them to ash, water vapor, carbon dioxide, and other products formed by combustion. Incineration is DoD’s preferred method for destroying chemical warfare agents and munitions. In 1984, the National Research Council endorsed incineration as a reliable and safe destruction method.

Since then, millions of pounds of chemical warfare agents have been destroyed safely using the incineration technology at chemical agent disposal facilities in

Some types of chemical munitions contain propellants or explosives in addition to chemical warfare agents. After the contents of these weapons are drained, their empty casings might contain leftover materials that could be hazardous. Incineration technology is used to treat the empty casings and destroy any residual chemical agents or their hazardous breakdown products.

The DoD’s neutralization process breaks down chemical agent with hot water and a caustic compound. In 2002, DoD chose the neutralization method to destroy chemical warfare agents stored at chemical agent disposal facilities in Aberdeen, Maryland, and Newport, Indiana. During the destruction process (called chemical hydrolysis), sodium hydroxide was added to the chemical warfare agents. Afterwards, the waste from this process was treated further at a different location.

In March 2005, the Aberdeen facility finished successfully destroying its stockpile of mustard agent. Process improvements developed at Aberdeen were later incorporated into the process at Newport.

At Newport, the nerve agent known as VX was stockpiled in ton-sized containers. The VX was drained into a chemical agent transfer system. The VX then was pumped into a reactor inside a contained and monitored area.

Inside the reactor, the VX was hydrolyzed by adding a 200°F solution of water and sodium hydroxide. The empty ton containers were washed and decontaminated by using a high-temperature heat treatment. This treatment is similar to that used to destroy waste material at the incineration sites. All VX stored at the Newport site was safely destroyed and the facility successfully closed in 2010. 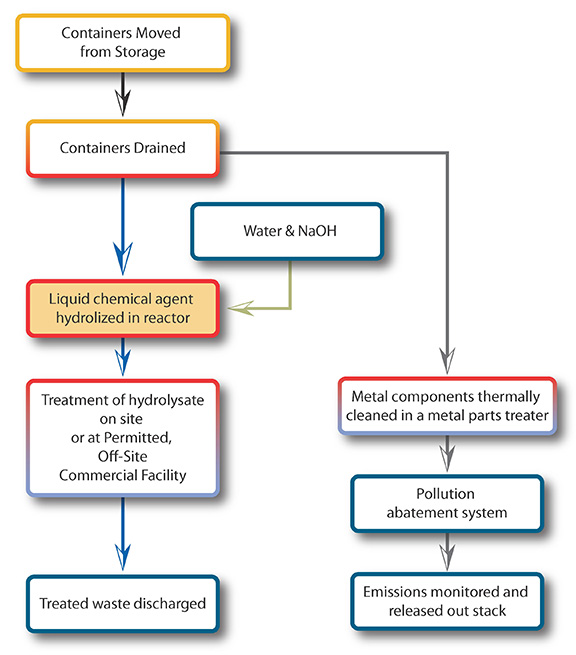 The DoD’s neutralization process breaks down chemical agent with hot water and a caustic compound. In 2002, DoD chose neutralization followed by biotreatment as its method to destroy 2,611 tons of mustard agent in projectiles and cartridges at Pueblo Chemical Agent-Destruction Pilot Plant in Pueblo, Colorado. Biotreatment is the processing of organic waste, in this case chemical agent breakdown products, using living organisms such as bacteria, fungi or protozoa. It is an environmentally friendly, relatively simple and cost-effective alternative to other clean-up options.

DoD also chose its neutralization process followed by supercritical water oxidation (SCWO) to destroy 523 tons of nerve agent and blister agent in rockets and projectiles at Blue Grass Chemical Agent-Destruction Pilot Plant in Blue Grass, Kentucky. SCWO uses water at a temperature and pressure above its critical point of 374°C (705°F) and 221 bar (3,205 psi). Under these conditions, the density of supercritical water is about one-tenth that of the normal liquid. This allows the organic materials to mix with the water, but does not allow the salts to mix with the water. Under these conditions, the organic chemical agent waste products are destroyed through an oxidation process. Fuel can be added to enhance the destruction through oxidation and breakdown to nonhazardous material.

DoD’s Assembled Chemical Weapons Alternatives (ACWA) is responsible for the safe destruction of all stockpiled chemical warfare agents at Pueblo and Blue Grass. 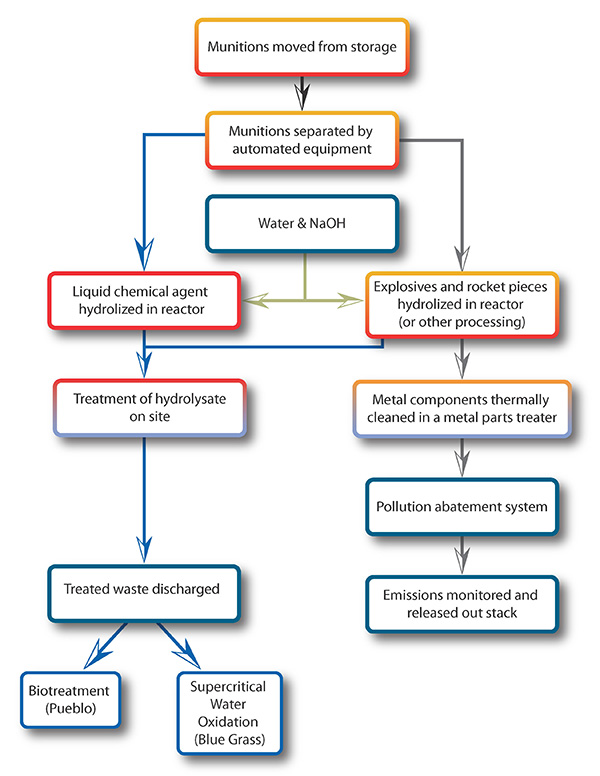 Visit http://www.peoacwa.army.mil/ to find out more about ACWA.