Get to the Point: Write for Immediate Understanding

In this module, you’ll get answers to questions like:

After this course, you’ll be better able to:

As a communicator, the key to plain language is to write clearly and concisely, so your reader knows what you’re trying to say right away.

This module will help you learn ways to get to the point faster — by structuring your sentences well, cutting out unnecessary words, and stripping out the jargon.

When it comes to clear communication, less is (usually) more. The more words you use, the longer your sentences, the more pages you write, the less likely your reader will understand or stick with you.

Keep your sentences and paragraphs short and focused. How short? Answer these questions to learn more.

In general, use the active voice instead of the passive. It’s stronger and more direct.

In an active sentence, the subject acts (or does something), like this:

Jill is the subject. She’s the one doing something.

In a passive sentence, the subject isn’t doing anything.

The powerful, inspiring speech was given by Jill.

Now, the speech is the subject and the reader has to wait until the end of the sentence to find out who actually took action. Passive sentences tend to be longer and harder to understand.

It has been decided that residents won’t have access to the beach.
A report will be written about the chemical spill.

Without a subject, your reader is left wondering: “Who?”

Use the Active Voice

Skip the passive voice when you can. It generally makes your writing:

While the passive voice may seem more objective or official when you’re writing, readers have a harder time understanding it. Passive sentences without a subject can even seem vague or deceptive. That’s not the impression we want to give in NCEH/ATSDR materials.

Make this excerpt active. When you need to, add a subject.

First, an assessment of the plans was carried out by ATSDR. Then, the draft guidance was made available for public comment. Finally, the comments received were considered and, when appropriate, incorporated into the report.

Here’s another way of rephrasing it:

First, ATSDR assessed the plans. Then, we invited the public to comment on the draft guidance. Finally, we considered comments and, when appropriate, incorporated them into the final report.

Use the Zombie Test

Want an easy way to check if your sentence is passive? Just add the phrase “by zombies” after a verb. For example:

Mistakes were made by zombies.

I made by zombies a mistake.

As professionals, we can get so used to jargon that we forget how confusing it is for everyone else. Don’t let jargon you use with colleagues spill into your writing for consumers.

When people see jargon, abbreviations, or acronyms that they don’t recognize, they just skip over them. That means they might completely miss your point.

What is your reader missing?

Take a look at these sentences.

They may make sense to you. But now let’s take a look at what your reader will actually understand.

Here’s how those sentences look from your reader’s perspective.

They’re pretty confusing, right? Skip the jargon when you can.

Rewrite these sentences without jargon.

Compare what you wrote with other possibilities.

If you have to use a technical term or abbreviation, make sure to explain what it means.

Verbs give energy and momentum to your sentences. But many writers hide them — covering them up by turning verbs into nouns. The problem is that once you turn your verb into a noun, then you have to add more words — like another verb — to replace it. So now your sentence is longer and more confusing — for no good reason. Check out some examples.

Getting rid of hidden verbs will make your writing simpler. For instance,

Instead of: We will undertake an assessment of the data.
Just say: We will assess the data.

Readability formulas give you a rough idea of how well readers will understand your writing. Based on word and sentence length and other factors, they rate your writing — often as a grade level. The lower the score, the easier it is (supposedly) to understand. But these formulas are not a perfect guide to clear communication. In fact, if you rely on them too much, they can actually make your writing less accurate.

Readability Formulas Can Mislead You

For instance, take a look at this sentence. 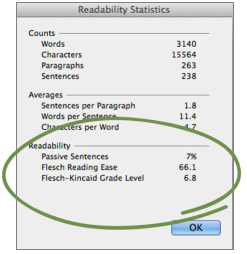 Grade level of 10.2. Way too high for our target audience.

How about this rewritten sentence?

Some bad wood can make you sick maybe.

Readability score of 0! Even a preschooler will get that!

The only problem? It doesn’t mean anything or make any sense.

The Problem with Readability Scores

Readability scores can help, but relying on them too much can make you:

Readability formulas are useful, but they’re not enough. Learn about other resources on the next page.

Want an alternative to simple readability formulas? Check out the NCEH/ATSDR Clear Writing Checklist Cdc-pdf[PDF – 594 KB]. Or use the CDC Clear Communication Index (CCI), a new research tool for CDC communicators. It has helpful tips — like always keeping your main message at the top, so it guides your writing. You can see helpful before and after examples on the CCI intranet page.

Including too much information in a public health material can backfire, no matter how accurate and well-written it is.

People might be so overwhelmed by a 10-page document that they won’t read any of it. That could be bad for their health, literally.

Instead, only include what your specific audience needs to know. If you give people a single page, they may be more likely to read the whole thing and learn some key facts. That’s a much better outcome. 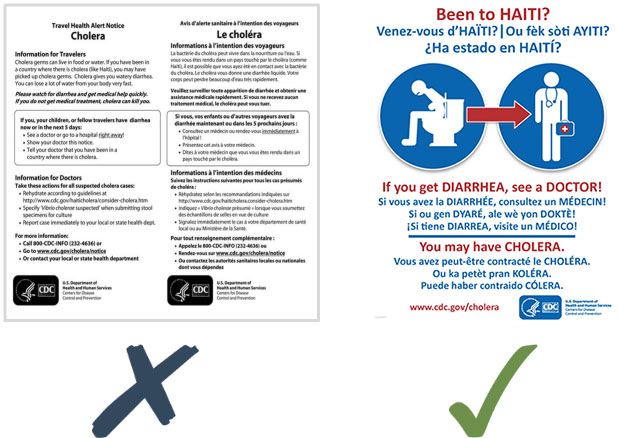 Don’t let your writing get flabby. Keep it lean and concise. Your ideas will be clearer — and your readers will understand what you want them to know.

If it is possible to cut a word out, always cut it out.
George Orwell
Source: Orwell, G. (1946). Politics and the English language.
Retrieved October 9, 2014, from http://www.plainlanguage.gov/whatisPL/definitions/orwell.cfmExternal

You’ve finished the second testing module. Take what you’ve learned with you.
Download Summary Cdc-pdf[PDF – 254 KB]
You can also take the other 2 modules in the series: