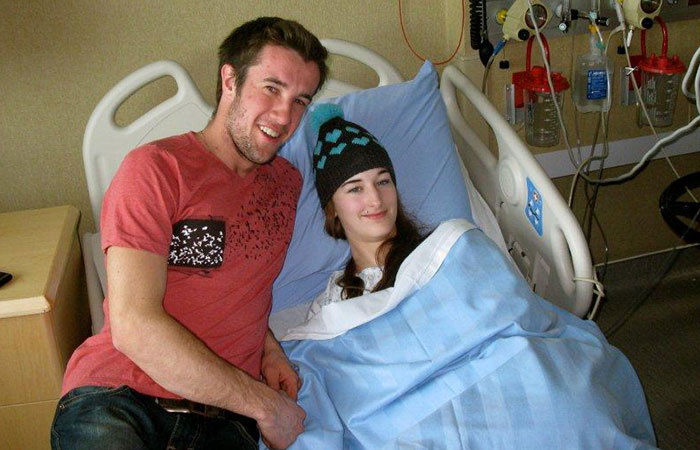 Suzanne Lambregts is a 19-year-old from Alberta, Canada, shown here recovering in the Red Deer Regional Hospital from her second incident of deep vein thrombosis and pulmonary embolism, with the support of her boyfriend, Austin Bristow.

I’m a 19-year-old who has survived two consecutive incidents of deep vein thrombosis (DVTs) and pulmonary embolism in a period of 9 months. My primary care doctors and hematologists have not been able to come up with a reason for either incident. My purpose in sharing my story is to raise further awareness about blood clots, as well as provide inspiration to those struggling. The date of my first diagnosis was June 1, 2011, when I learned I had DVTs in my left arm, total occlusion to the subclavian vein and an acute pulmonary embolism in my left lung. I was working in a saw mill piling lumber when at work I suddenly had to hyperventilate just to breathe. I took a few days off work on bed rest and it seemed to settle down. So I returned to work, and that same night my left arm swelled to at least twice its normal size. I then saw two different doctors before one suggested that they should look for clots and that’s when my clots were found.

I spent a week in the University of Alberta hospital in Edmonton, Canada, where a series of tests were done. No leads came about to explain why this had happened so suddenly. I was on birth control pills for a period of 3 months before the diagnosis, but it was ruled out that this could be the cause because it was highly unlikely the extent of my clots could develop that fast. It took me about two months, but I regained my strength and continued with work and started my college education in massage therapy. I seemed to be responding well to the blood thinners until around Christmas time when I started getting random chest pains. Also, my left arm would swell after any massages I did.

In January 2012 I was doubling over with sudden chest pains. My instructors convinced me, even though I was reluctant, to get checked out at the emergency department. Because my vital signs were stable, the emergency room doctor told me to come back the following morning for an ultrasound. They then found that my subclavian vein had blood clots again and that there was a large mass in my right lung. Angels must have been looking after me because again, I survived. This time internal medicine doctors ran a variety of tests and nothing abnormal came back. We were all at a loss for words. I used to be an extremely healthy and active girl, but once you get hit with two blood clots, even daily life changes. I’m young, and have no idea if another clot will hit, but I’m a survivor of a silent killer that could have taken me the first time. It’s made me realize how much of a gift life truly is. I’m hopeful that we’ll find a cause for these clots soon and that eventually researchers will be able to learn more about the nature of blood clots and how to prevent them for other’s sake. 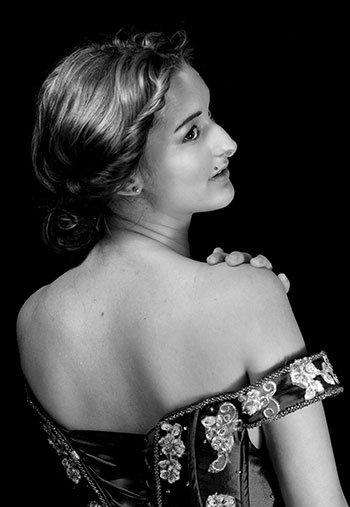 You may know me as the girl who miraculously survived two pulmonary embolisms. It’s been a long road this last year, and there’s still more to my story.

April 23, 2012 my fears were further intensified. For the entire day, I had been experiencing extreme chest pains, and it had only been 3 months since my most recent diagnosis of another pulmonary embolism. I panicked and drove myself to emergency and from there ended up in the hospital. A VQ scan found two “newer” clots in my right lung.

One would think that with all this uncertainty that I would be paranoid about death by now. Granted, I do have those times where I wonder, but I know that I must still be alive for a reason. I have a wonderful support group of family & friends, a devoted boyfriend who never leaves my side, and even strangers praying for me who’ve read my story online. With all that being said, I have my own words of further encouragement I would like to share.

Even in times of utmost uncertainty, life continues on. It is so imperative that we all make the most of our lives, whether we feel as if we have been dealt the worst hand in life, or that we have it all pretty easy. Time is such a precious gift. Take the time to pursue your dreams, and love the ones you hold close. I have no idea why God has allowed all of this to happen, but I know he hasn’t left me alone. I am not a preacher by any means, but I know I have felt such peace and calmness during these trials. He isn’t just a crutch to use only when hard times hit, although that is when you feel Him most.

If my purpose is just to encourage others struggling to continue fighting, then so be it. My name means “Joy of Life” for a reason. Despite all the hardships I have encountered, I will not dwell on the damage that has been left behind. These blood clots do not define me for who I am. No matter how much you do not want to deal with the trials you are faced with, know that they can be conquered. Do not allow yourself to just be the victim. You are worth so much more than that.

CDC would like to thank Suzanne for sharing this personal story.