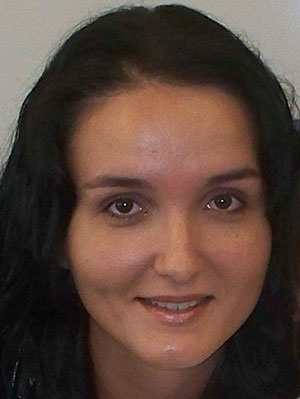 My name is Sofija Reston and I would like to share my story about blood clots. By telling my story, I hope that I can help educate others about the importance of knowing the risk factors, signs, and symptoms of blood clots.

In 2012 I was a typical, healthy 35-year-old woman. However, in January of 2012 I went to the emergency room (ER) because I was experiencing extreme fatigue and chest pains so severe that I felt like I was being choked. In the ER, an echocardiogram (EKG) was done. An EKG is a test that checks the electrical activity in your heart. I was told that everything was fine and that it was probably anxiety since I had been going through a very stressful time. However, if I ever had pain like that again I was told to return to the ER.

A few months later, I awoke around 6 am with sharp pains in my neck. I got up and walked around thinking I just slept wrong but the pain then moved to my stomach area. I thought it could be a problem with my gallbladder. After being in pain and short of breath all day I went to another ER and provided the list of medications I was on. I also relayed the fact that I had been on hormonal birth control. My vitals were fine and I was not coughing up blood. The ER doctor said that my gallbladder was fine but after reviewing some blood tests he could tell that my blood was a bit thick. Learning this, I then informed the doctor that my mother had been on a blood thinning medicine called warfarin for about 12 years. She previously had experienced seven blood clots. Very quickly I realized that this was serious.

I was then admitted to the hospital and a computed tomography (CT) scan was done. This is a test that uses x-rays to make pictures of structures inside the body. The CT scan confirmed the presence of blood clots in my lungs, a condition also called pulmonary embolism (PE). I was told I had pleural effusion, which is a buildup of fluid between the layers of tissue that line the lungs and chest cavity, and damage to my lower left lung. I was in the hospital for six days taking a blood thinning medicine called warfarin and also receiving heparin shots in my stomach. While I was in the hospital, the pain felt like as if someone kicked me in the ribs. For three nights I had to sleep sitting upright. I was propped up with pillows for weeks afterwards, and the pain was excruciating.

After 6 days in the hospital and prior to discharge my ER doctor actually came up to my room to wish me well. He is my hero. The nurse assigned looked me straight in the eyes and told me I was extremely lucky and said if I ever had symptoms like this to get to the hospital immediately. The internal medicine doctor told me to stay off hormonal birth control for the rest of my life because it may be a risk factor for some women who are at increased risk for blood clots.

I was on put on warfarin for about 6 months. After that I had genetic testing done to determine if it was hereditary and the test results came back negative. So I l do not know why my mother suffers from blood clots but she is still on warfarin. I do have some damage in the pleura, the thin tissue that lines the chest cavity and surrounds the lungs. As a result of this damage, I still have some chronic pain, shortness of breath, and fatigue. I am not able to do any of the previous activities that I used to do such as basic housework, yard work, recreational activities, or sports. The good news is that I know I am alive today because I listened to that internal voice that told me I needed to go to the hospital.

I am telling my story because I want others to know that when they have symptoms such as this they need to seek care immediately. I sensed from the beginning that something was wrong. If you experience these symptoms and think something is not normal for you, it is critical to seek care immediately. When you are with your healthcare provider, be your own advocate and voice your concerns. This is particularly important because some symptoms can mimic other medical conditions. Also, not everyone experiences classic symptoms of blood clots. Be thorough in discussing your symptoms with your healthcare team because it could save your life!

The bottom line is that blood clots pose serious health risks and a PE can be fatal. You can help prevent blood clots by knowing your family history and being aware of the risk factors. Please visit this link to get the facts about blood clots: www.cdc.gov/ncbddd/dvt/facts.html

CDC would like to thank Sofija for sharing this personal story.