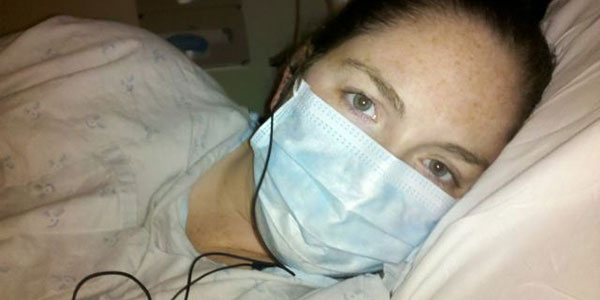 I’m Sarah Cook and I was diagnosed with multiple bilateral pulmonary emboli on October 4, 2011. I will turn 30 in April, 2012, and before this incident was a very active person. In the photo above I’m at the emergency room at my local hospital waiting for the CT scan mentioned below. The mask was precautionary in case I had tuberculosis or some other communicable disease.

My experience started with coughing up blood, only in the mornings, for a few days. Then my lungs started hurting and quickly progressed to where I could not lay down. I started to increasingly coughing up blood throughout the day. I had no shortness of breath. I saw my doctor on a Monday and she ran some tests and ordered a CT scan to determine whether there was a blood clot. Monday night I hardly slept and I started a low-grade fever. I spent the night sitting up on the couch sleeping vertically when I could. I thought I was finally feeling a little better until I threw up at 4 am and realized I was throwing up blood. I returned to my doctor’s office first thing in the morning and she sent me straight to the ER.

The ER medical team tested my blood for genetic disorders and did an ultrasound of both of my legs, looking for a sign or trace of a DVT but found none. Shortly after the CT scan was completed that afternoon a doctor came in and told me I had multiple blood clots in both of my lungs and that I was being admitted to the hospital. Within minutes I was receiving my first blood thinner injection. I was not sure what exactly this all meant. I had heard the term “pulmonary embolism” before but did not know what it was.

I was released from the hospital after three days and spent the next three months unable to work while recovering. Even on the pain medicine, I was in constant pain until almost November, which was when I was able to lay down again. I saw a hematologist after being released from the hospital and he told me I tested positive for the inherited clotting disorder called Factor V Leiden (FVL). They believe that FVL, combined with being on birth control, is what caused the pulmonary emboli.

Currently, I am still on blood thinning medication and back at work part-time, although fatigue is still a factor in my recovery. I had been doing Zumba exercise three times a week before this happened. Now, going to work and moving around is enough to tire me out. I’m working on getting my endurance back; however, I am finding out that it’s a slow, long recovery process. I will soon be meeting again with my hematologist to discuss how I can best live successfully with FVL in the future.

CDC would like to thank Sarah for sharing this personal story.