Real Stories from People Who Have Experienced Blood Clots – Rick 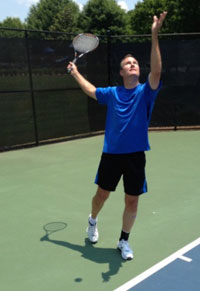 I am a 47 year old male, and am a DVT survivor. I rolled my ankle in January of 2012 playing tennis. I went directly to the emergency room, and they put me in a boot. I wore the boot for 4 weeks, then removed it and began wearing an ankle brace. It was uncomfortable, and swollen, but the swelling seemed to go down each night. After 6 weeks, my ankle and calf were extremely swollen during the day; about 250% the size of my other leg. I showed it to some friends, who have had multiple sprains before, and they immediately told me that it wasn’t right. I called and set an appointment with my doctor for the next day.

Upon seeing my leg, the doctor immediately sent me to the hospital for an ultrasound. I sat out in the hospital parking lot, and did a webinar and conference call for a prospective customer before going in; I did not yet understand the severity of my condition. When the technician did the ultrasound, she informed me that I had blood clots up and down my entire leg, and proceeded to show me the screen and explain what it meant. They then had me check into the hospital. At this point, I thought they’d give me a shot, and I would still be able to make it to my friend’s house to watch the NCAA basketball tournament. He was cooking up steaks, and I purposely skipped lunch so as not to ruin my appetite. I had been walking on it, and had been flying for work, for the past six weeks. How bad could it be? Well, after having 3 or 4 nurses tell me that it was a miracle I was still here, and after talking to the doctor later that evening, the severity of the situation began to set in.

The doctor strongly urged me to have a procedure called catheter-directed thrombolysis. What happened to the magic shot and some medicine, so I could go eat my steak and watch basketball with my friends? The doctor said that the interventional radiologist had reviewed my ultrasound, and suggested we do the surgery Sunday morning. I spoke with a doctor friend of mine, who called a hematologist friend of his, who stated that if the interventional radiologist was willing to come in on a weekend for surgery, I had better say yes; apparently they do not normally come in on weekends. I read up on the topic all I could, and then said let’s go through with the surgery. While it was a little uncomfortable, as I had a catheter in the vein in my calf for 24 hours and could not move, it was well worth it! The procedure cleared up almost all of the clots, and they inserted an inferior vena cava (IVC) filter to keep any remaining clots from getting to my lungs and causing a pulmonary embolism (PE).

I had no idea that I could get a blood clot from having a sprained ankle. I guess if I had gone to the doctor for a two week checkup, it may have been caught sooner. Nonetheless, within a week after being released from the hospital, I was walking on the treadmill; albeit at a much slower pace than I am used to. I had read on several internet sites that walking was the best thing for healing, and I am used to walking on the treadmill every morning. After 4 weeks, I was walking on the treadmill at the same speed as previous, and after 6 weeks I started playing tennis again. After 3 months, they removed the IVC filter. While I am now wearing a compression stocking on the one leg, and am on blood thinners, I am back to all the activities in which I engaged before DVT, and at the same level; not that I was any good before. Also, my leg is barely swollen. I feel so blessed that God was watching over me. I guess He has more work for me to do here.

CDC would like to thank Rick for sharing his personal story.