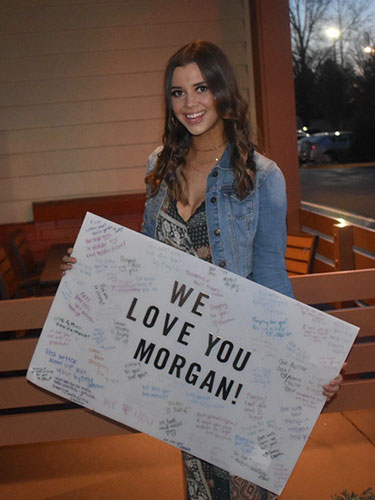 Donya Spencer was happy to have her 19-year-old daughter Morgan back home with her and the family for the weekend.  Morgan had just returned from the University of Georgia (UGA), where she was a freshman studying economics and pre-law.  They were both looking forward to catching up and spending some time together.  However, at the time, neither one of them knew that Morgan was on the brink of a major health crisis.

Symptoms Leading Up to the Diagnosis

When Morgan woke up Sunday morning complaining of a sore throat, she went to a nearby urgent care center for a strep test.  The doctor looked at her throat and commented that it looked and smelled like strep but did not run a strep test.  She was given medicine, called a Z-pack, and returned home.  On Sunday afternoon, she returned to UGA, expecting to feel better the following day.

Morgan went to class Monday, despite still not feeling well, as she believed the class was too important to miss. On Monday evening, she began feeling very cold, accompanied by extreme chills and shaking (a condition called rigors).  Prompted by a call from Morgan saying she was violently shaking, Donya, Morgan’s mom, drove to Athens to bring her home to see her regular pediatrician on Tuesday morning.  While they sat in the waiting room the next morning, Morgan became nauseous. Her face became pale, her lips turned blue, and she completely lost her vision. She felt like she was about to pass out. The pediatrician took some blood and tested her for flu, mononucleosis (mono), and strep throat (strep); her results were negative for all.  Thinking it might be a virus, the pediatrician treated Morgan with a steroid medicine and told her to continue the Z-pack.

Morgan stayed at home Tuesday night and agreed to miss class on Wednesday so her mom could watch for any change in her symptoms.  Donya did not want Morgan to return to school until she saw some improvement in her symptoms. Morgan felt a little bit better on Wednesday afternoon and still, at this point, had no fever.  Insisting that she could not miss another day of class, Donya agreed to drive Morgan back to school Wednesday night.  While returning home after dropping off her daughter, Donya received a call from Morgan.  She was calling her mom to tell her she was having extreme rigors again.  But Donya, thinking Morgan was just stressed about falling behind on schoolwork, told her daughter to try to rest.  Morgan took her mother’s advice, but simply could not get warm or control her shaking.

On Thursday morning, Morgan called her mom when she got to her first class to tell her she couldn’t stop shaking and felt like she was about to pass out; then, the phone went silent. Afraid that her daughter passed out, Donya called the UGA police and asked if they could check on Morgan. She was told Morgan was already being helped by campus police and an EMT after being found shaking and disoriented by a professor.  The paramedics evaluated Morgan and recommended she go to the emergency department (ED) since her heart rate was still over 140 after sitting down for 20 minutes. At the same time, Donya received a call from Morgan’s pediatrician, who explained that her blood work indicated something could be wrong with Morgan’s kidneys.

When they arrived at the ED, Morgan’s heart rate was still very high; the nurse commented that she looked septic (sepsis is an infection causing organ failure and dangerously low blood pressure).  Morgan told the nurse that she felt a lump on the left side of her throat and that her throat hurt so bad it felt like she needed to have her tonsils removed.  The ED doctors gave her fluids and penicillin for infection. She was again tested for mono and flu, which were negative.  While in the ED, Morgan began having pain in her chest, back, and shoulders, so an EKG (a test to check for signs of possible heart conditions) was performed and she was given morphine for the pain; no imaging tests were run.  Donya was worried for her daughter, but also knew this was the third doctor Morgan had seen in 5 days, so if something were wrong, surely it would have been found. Morgan was given fluids and IV (intravenous) medications, which helped her heart rate come down, helping her to rest. She was discharged from the ED that evening and, instead of taking her back to school, Donya drove her back home again.

Once home, Morgan couldn’t get to sleep. In the middle of the night, she began having extreme rigors again.  Not wanting to wake her parents, she took a very hot bath and drank hot water in an attempt to warm up, but it didn’t help.

On Friday morning, Morgan’s throat was feeling better, but she began having back and shoulder pain again. Thinking the pain may be stemming from Morgan having been confined to a bed for the past few days, Donya took her daughter to see a chiropractor. The chiropractor ruled out muscular pain but commented that “something else is going on with her.”  When they got home, Donya updated the pediatrician on Morgan’s condition and was instructed to watch her daughter over the weekend. By Friday afternoon, Morgan’s back pain had grown more severe. Thinking she had a kidney stone, Morgan’s parents took her to their local ED, where a doctor performed a CAT scan (a scan of a part of the body that aids in the diagnosis or detection of disease) that captured the bottom part of her lungs, showing pneumonia. The doctor recommended that Morgan be admitted, saying “It is unusual for a healthy 19-year-old to get pneumonia.”  After being admitted, Morgan was given pain medication, but remained uncomfortable and in pain throughout the night. Morgan’s parents were very worried about her but had no idea how sick she truly was. Morgan would not leave the hospital for 18 days.

On Saturday morning, a pulmonologist (lung specialist) ran an array of tests that included CAT scans of her neck, heart, and lungs.  As a result of these tests, the pulmonologist was able to diagnose Morgan with Lemierre’s syndrome, a rare illness that occurs when bacteria from a throat infection crosses into and infects the jugular veins. The pulmonologist also discovered Morgan had many septic blood clots in her lungs (called pulmonary embolism). Morgan had one large blood clot in her internal jugular vein, parts of which had been breaking off into her lungs, causing her upper body pain. She also had fluid in and around her lungs making it hard for her to breathe. The infection had also spread to Morgan’s bloodstream (a condition known as sepsis), causing her to run a high fever. She was transferred to the intensive care unit (ICU), where she stayed for 3 days. “The first night was the scariest night of my life,” Donya said. She was so sick, and I was terrified that she would die.”

Morgan fought hard, but her recovery was very slow. Once stable and out of ICU, she spent a couple weeks on an intermediate care floor, where she was under the care of many doctors, including pulmonologists, infectious disease specialists, hematologists (blood specialists), ear, nose, and throat specialists, and pain management specialists. It took weeks for the strong IV antibiotics to fight the infection. She was in terrible pain, so she was given strong pain medication. She coughed constantly and was very scared when she coughed up a lot of blood. “That was the only time I really thought—I’m going to die,” Morgan said. Because she was on a medication to prevent and treat blood clots, they had to draw her blood every 6 hours to make sure the right amount of medication was in her blood. She was also given oxygen to help her breathe.

It was a very tough recovery. For the first couple of weeks, she could barely stand.  After 18 days, she was finally able to go home. She continued IV antibiotics for another 4 weeks from home and was prescribed an oral medication to prevent the blood clots from getting larger. She was very weak and lost more than 20 pounds.

Impact of Her Condition

Lemierre’s syndrome took a toll not only on Morgan’s body, it took an emotional toll on her as well.  Morgan had always been healthy, playing sports all her life.  Now, things most of us take for granted, such as being able to go to the bathroom by yourself or being able to walk, were very difficult for her. She was forced to withdraw from all but one class for the fall semester, which was very upsetting for her, as prior to her diagnosis, Morgan was doing exceptionally well academically.  She was unable to return to her dorm for months, as her doctors were worried that even catching a cold could be detrimental to Morgan’s recovery.  This meant she had to miss out on football games, sorority events, and the start of college life, which was devastating for her.

Prior to her diagnosis, Morgan and her family had never heard of Lemierre’s syndrome.  No one in her family had ever experienced anything like this. “Apparently it is very rare.  Only about 4 in every 1 million people develop Lemierre’s Syndrome,” says Donya.  Lemierre’s used to be more common, with a very high mortality rate in the pre-antibiotic era. With the widespread use of antibiotics, it all but went away. But cases have been on the rise, and it typically strikes otherwise healthy young adults. After some research, Morgan and her family were able to find two Facebook groups dedicated to supporting people with this rare illness. Reading other people’s stories was both helpful and scary for them, as many with Lemierre’s have had long-lasting effects. 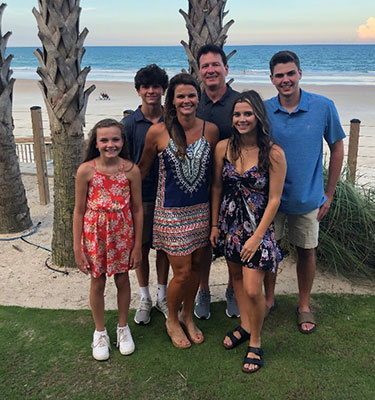 How Is She Doing Now?

Overall, Morgan is doing very well. Life has finally returned to normal. The blood clots in Morgan’s lungs have been reabsorbed by her body.  She continues to have some back pain, which her doctors say may be from the scar tissue or due to a damaged nerve from thoracentesis (a procedure she had done to remove excess fluid from the space between her lungs and chest wall).

Morgan’s and Donya’s Tips for Others

Both Morgan and Donya agree they want to spread awareness of this condition. They want all healthcare providers to know about Lemierre’s syndrome so that patients can be diagnosed as quickly as possible. They want everyone to know that this illness exists and can affect anyone, but especially the young college student. When asked what advice they would give to others, they urged others to:

CDC thanks Morgan for sharing her personal story.