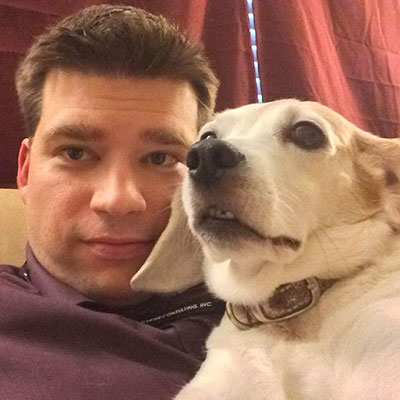 My name is Justin Lushbaugh, and my story about blood clots goes back to July of 2010. Just a few weeks away from graduation at the time, I was a business major, studying at Georgia State University. Personally and academically, I was under a lot of pressure; between studying for final exams and finishing projects, I had very little time to do anything for myself– even sleep.

It all started one morning, when upon waking, I noticed a strange pain in my right calf muscle. I looked closely and noticed a circular red mark that looked like a rash on my calf. I took a few steps – each step met with a painful, nagging feeling –as if my leg were hooked up to an invisible IV unit with attachments at multiple sites along my calf – each tugging on a vein. Though it hurt, I figured since I only had one class that day, I could tough it out – so I went to school.

When I arrived at class, I sat through a three-hour lecture, not moving from my seat even once. After the class concluded, I stood up for the first time since arriving, and the pain from my leg was intense! It literally felt as if my leg was going to explode. I was advised to go to Student Health Services where I could see a physician’s assistant (PA).

After walking about a mile to Student Health Services (which seemed more like a hundred miles given the intense pain), I was seen by several PAs who all suggested a blood clot diagnosis. Unfortunately, diagnostic equipment wasn’t available to confirm, so the team of PAs urged me to go to the nearest emergency room (ER) to get checked out as soon as possible.

Taking their advice, I went to an ER, and was later released, having been diagnosed with superficial clots (blood clots near the surface of the skin rather than in the deep veins). The next day, one of the PA’s from Student Health Services followed up with me. Not satisfied with the ER’s diagnosis, he made an appointment for me to see a vascular specialist, a physician who diagnoses and manages disorders of arteries and veins. By this time, the circular mark on my calf had turned to a line, running from my calf to just behind my right knee.

I met with the vascular specialist who used an ultrasound (which they also did at the ER), a test to diagnose blood clots in the legs, and she also diagnosed the clot as superficial. I wasn’t yet convinced of the diagnosis, so when I got home, I took out a marker and drew a thick, black line indicating where the red line running from my calf ended. I went to sleep, and upon waking the next morning, I noticed that the red line on my leg had climbed about an inch and a half past the black line I drew the previous night. I called the vascular specialist and explained the situation. She took action immediately and arranged for me to have a room in the hospital where I could be treated. I was later told that instead of a superficial clot I actually had a cluster of marble sized blood clots travelling through one of my deep leg veins.

Because of the speed at which the clots were moving, I was immediately put on medicines called blood thinners – heparin and warfarin – to combat the blood clots. I also had a multitude of tests run on me – blood tests, chest x-rays, and even CT scans. After ruling out cancer and pulmonary embolism (blood clot in lungs), a blood test came back indicating I have a genetic blood clotting disorder caused by the Factor V Leiden mutation that puts me at higher risk for developing blood clots.

As a result of my diagnosis, I will likely be treated with blood thinners for life, but I don’t let it stop me! I know that there are things I can do to help prevent blood clots. It is important to me that l lead a healthy, active life. Aside from my regular visits to the gym, I also get up from seated positions and move around frequently to help prevent more blood clots from forming.

For others who may be facing the possibility of blood clots, I suggest the following:

CDC would like to thank Justin for his personal story.