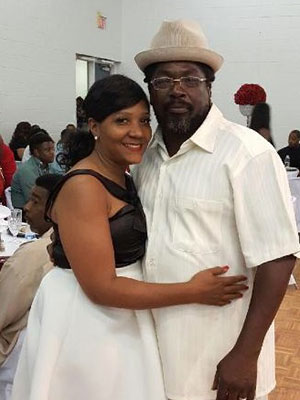 Anniece Minor is a Health Communications Specialist in the National Center for Chronic Disease and Public Health Promotion at the Centers for Disease Control and Prevention.

I am a sufferer of chronic migraines, and after work one day in November 2014, I went to stay at my sister’s house and lay down because of a severe migraine. Eventually I could no longer stand the pain, and my niece drove me to the emergency room. Once I arrived at the emergency room, I described my migraine to the physician. Per standard protocol, I was given an intake questionnaire. One of the questions asked about chest pain, and I reluctantly described the light chest pains I had been having for the past three days. I didn’t want to mention them because I suspected they were from indigestion caused by my diet. As a result of my chest pain, I was required to take an EKG (electrocardiogram test). An EKG records the heart’s electrical activity. When there is a blood clot near the heart, the heart has to work harder to circulate the blood, which can sometimes be detected by an EKG. My EKG results showed that I had a massive pulmonary embolism, which is a blood clot in the lungs. I was immediately placed on blood thinning medication, but unfortunately I had a negative reaction to the blood thinners. The doctors then experimented with different medications by infusing them into my bloodstream through an IV. Ultimately, I was hospitalized for 10 days, while receiving multiple procedures and treatments.

After I was released, I followed up with a pulmonary (lung) specialist. I underwent a procedure that placed a filter—an umbrella-like device—into my inferior vena cava, which is the large vein that returns blood to my heart from the parts of my body that are below my chest. It was a major operation that involved the insertion of the filter into the big vein, which could then prevent blood clots from traveling to my heart and into my lungs. The filter was removed in August, 2015.

My doctors determined that my clot was likely caused by a major surgical procedure I underwent in October, 2014. After the operation, I made an effort to move around and get my blood flowing, but there were many days when the pain was too intense for me to move around as much as I should have. My doctors believe that the clot started in my leg and then traveled through my heart and into my lungs.

Prior to my experience, I had never heard of blood clots. I was unfamiliar with the signs and symptoms, so I didn’t think anything of the chest pains I had in the days leading up to my hospitalization. I also attributed the lightheadedness I experienced to my migraine. Had I not developed the intense migraine, I may never have made it to the emergency room and may not have lived to share my story. Now that I am familiar with the signs and symptoms, it is easier for me to identify the chest pain and lightheadedness I had after a major surgery as symptoms of a blood clot in the lungs. The experience truly changed my life, and since then I have improved my self-care tremendously. I started taking better care of myself, including eating healthier, taking up Tai Kwon Do, and increasing my daily meditation and prayer. Through this experience, I realized that you can’t take your health or your life for granted and it’s important to listen to your body. Learn the signs and symptoms of a blood clot, and don’t ignore warning signs.

CDC would like to thank Anniece for sharing this personal story.