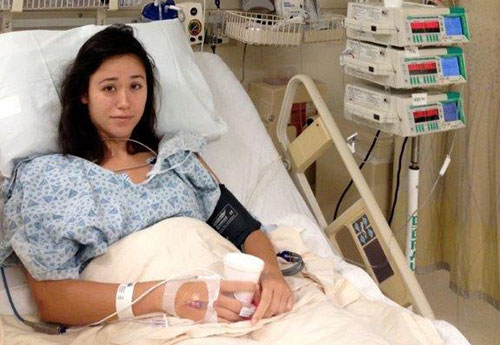 My name is Amaris White and I want to share my personal experience with blood clots. My hope is that by sharing this information, you will learn the signs and symptoms of this potentially fatal condition and know how to protect yourself and others.

In 2012 I was an active and healthy 25-year-old. I had run two half-marathons during the past year, and I was traveling for a month with friends to Southeast Asia to celebrate my successful completion of the bar exam.

We had been traveling for a few weeks when my lower back started to ache. I didn’t think much of it and ignored it for a week, chalking it off to the uncomfortable hostel beds. On our last night in Kuala Lumpur, Malaysia, my leg started to swell and within a few hours the pain and swelling were so severe that I could no longer walk. My left leg became discolored and for the next two days my roommate and I went to different hospitals in Malaysia in order to get a diagnosis—all the while my leg grew progressively darker, the pain increasingly crippling. I had a difficult time getting a diagnosis, but ultimately I was able to have my leg and foot examined through Doppler ultrasound. These test results confirmed that I had deep vein thrombosis (DVT), a condition in which a blood clot develops in a deep vein in the body.

Here I was—10,000 miles from home and with a severe DVT. My entire left leg, through my pelvis and nearly all the way to my heart, had an enormous blood clot. My condition was so serious I could have easily lost a leg or died. To top it off, though I didn’t know it yet, part of the blood clot in my leg had already broken off and traveled through my heart and into my lungs. This complication (called “pulmonary embolism” or PE) is often fatal.

Because my prognosis was grave and I needed more medical attention, I flew from Malaysia to Tokyo. I made this decision, despite the risks, based on the recommendation of my friend’s father, an emergency room physician. When I arrived in Tokyo I was rushed into the intensive care unit and into surgery, where they confirmed the DVT and multiple PEs. To prevent more PEs, the Japanese doctors placed a special filter, called an inferior vena cava filter (IVC filter), into the vein that goes to my heart. This filter was surgically placed to prevent future life-threatening PEs by catching blood clots before they traveled into my lungs.

It is likely I had blood clots for at least three weeks but did not know it. Anyone can have DVT, but your risks increase with each risk factor present. I had just slept through three long flights to Bangkok—1 hour, 12 hours, and 7 hours long. I was exhausted and dehydrated from a weekend of celebrating the end of the bar exam. I slept the entirety of each plane ride, walking only to transfer between flights. I now know that on long-distance travel such as this, you are advised to move the legs and flex the calf muscles in order to help reduce the risk of blood clots.

I later found out that I had two other risk factors, which greatly increased my odds of developing blood clots. I was on hormonal birth control and I have a genetic condition called Factor V Leiden. Factor V Leiden is a relatively common inherited blood clotting disorder that can result in thrombophilia. Thrombophilia is a disorder in which there is an increased tendency to form blood clots that can block blood vessels.

After having DVT as extensive as mine, I was told that I wouldn’t be able to run again without excruciating pain. Determined not to let my medical history define my future, I have since trained for and run two half marathons and am currently training for three more half marathons in the spring of 2014, and the New York City marathon in November 2014.

Your body can do a lot for you. I have exceeded all my doctors’ expectations, and because of my running and physical activity, my body has compensated by creating new veins. This process is called vein collateralization. In other words, even though my deep vein is blocked off because of DVT, my body is continually developing new, collateral veins to carry my blood. Enough blood can now travel to the tissues in my leg through smaller, collateral veins that have developed to help the flow of blood. And even though my running is still painful, by keeping my blood pumping and staying active, I am running faster and longer every day.

If you have had DVT, I encourage you to stay active to improve your physical condition. Learn everything you can about your risk factors and the signs and symptoms. Protect yourself and learn more about the facts of DVT and PE by visiting here:

CDC would like to thank Amaris for sharing this personal story.