Primary prevention strategies that build communication and problem-solving skills and address risk factors for violence among young persons can stop violence before it starts. Expansion of these strategies and additional interventions focused on injured young persons while they are receiving ED treatment to connect to immediate and ongoing community support might decrease the risk for reinjury or fatality. CDC’s technical package to prevent youth violence helps communities and states prioritize strategies with the best available evidence. 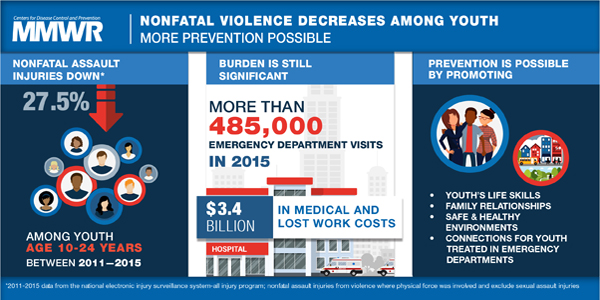 In 2015, persons aged 10–24 years who were treated for nonfatal assault injuries in emergency departments (EDs) in the United States accounted for 32% of the approximately 1.5 million patients of all ages that EDs treated for nonfatal assault injuries (1). CDC analyzed data from the National Electronic Injury Surveillance System–All Injury Program (NEISS-AIP) to examine 2001–2015 trends in nonfatal assault injuries among youths treated in EDs, by sex and age group, and to assess current rates by sex, age group, mechanism of injury, and disposition (1). Rates for 2001–2015 were significantly higher among males than among females and among young adults aged 20–24 years than among youths aged 10–14 and 15–19 years. During 2011–2015, rates declined for all groups. The 2015 rate among persons aged 10–24 years was 753.2 per 100,000 population, the lowest in the 15-year study period. Despite encouraging trends, the assault rate among young persons remains high. Rates in 2015 were higher among males, persons aged 20–24 years, and those who incurred intentional strike or hit injuries. Nearly one in 10 patients were admitted to the hospital, transferred to another hospital, or held for observation. Youth violence prevention strategies, including primary prevention approaches that build individual skills, strengthen family relationships, or connect young persons treated in EDs to immediate and ongoing support, can be implemented to decrease injuries and fatalities (2).

NEISS-AIP collects data from a nationally representative sample of EDs, using specific guidelines for recording the primary diagnosis and mechanism of all types of treated injuries. NEISS-AIP is operated by the U.S. Consumer Product Safety Commission in collaboration with CDC’s National Center for Injury Prevention and Control. Data are accessible using CDC’s Web-based Injury Statistics Query and Reporting System (1). The analysis was limited to patients treated for nonfatal assault injuries, which included injury resulting from an act of violence where physical force by one or more persons was involved and excluded injuries related to sexual assault. Data were stratified by calendar year, sex, and 5-year age group (10–14, 15–19, and 20–24 years). Data for 2015 were also stratified by mechanism of injury (struck by/against, cut/pierce, firearm, or other) and disposition (treated and released, transferred to another hospital, held for observation, left against medical advice, or left without being seen by physician). Annual injury rates (per 100,000 population) were computed overall and for the indicated strata. Joinpoint regression* was used to test the significance of trends from 2001 to 2015. Changes in the annual nonfatal assault rate among persons aged 10–24 years by sex and age group were examined. Annual percentage change (APC) estimates that were statistically significant (p<0.05) are presented to indicate the magnitude and direction of significant trends.

Most persons aged 10–24 years treated in an ED for nonfatal assault injuries (81.2%) were treated for injuries related to being intentionally struck or hit. Other leading mechanisms of nonfatal injuries included being cut, stabbed, or pierced (8.1%), and having firearm-related injuries (5.7%). Most persons in this age range who visited an ED for assault injuries were treated and released (87.0%); 9.9% were hospitalized, transferred to another hospital, or held for observation; and 3.1% left the ED against medical advice or left without being seen by a physician.

For decades, young persons have represented a substantial proportion of patients receiving treatment in EDs for assault injuries. The findings in this report demonstrate that the rate of nonfatal assault injuries among persons aged 10–24 years has declined since 2001, with significant declines overall and by sex and age group since 2011. These encouraging declines are consistent with previous analyses and recent trends in youth violence (3,4). The declines might indicate increased implementation and beneficial effects of evidence-based prevention strategies that reach young persons (2,5). A number of primary prevention strategies have been shown to reduce the risk for and occurrence of youth violence, including school-based programs that build communication and problem-solving skills and family approaches that help caregivers set age-appropriate rules, monitor youth activities and relationships, and address other risk factors (e.g., childhood conduct problems and delinquency) (2).

The implementation of brief ED interventions to reduce the continuation and escalation of violence is growing (8). These programs vary in design and duration but typically identify youths in the ED when they are examined for a violence-related injury. The programs are implemented by trained staff members (e.g., medical personnel, community service providers, and program outreach workers) who provide immediate and follow-up services to increase risk awareness, conflict resolution skills, and connection to community support (e.g., academic or vocational supports and mental health treatment). Research has shown that these programs have significant benefits, including sustained reductions in perpetration and victimization of peer violence (9). Evaluation of a specific program found that participants were 70% less likely than nonparticipating youths to be arrested for any offense during the 6 months after the program (10).

The findings of this report are subject to at least four limitations. First, injury rates are likely underestimates of the actual prevalence because data are limited to persons treated in EDs and do not include those who had injuries treated in other health care facilities (e.g., physician’s office or urgent care center) or those for whom no treatment was needed or sought. Second, data were coded by trained personnel based on narratives abstracted from patients’ medical records, for which details of the injuries and circumstances varied. Inaccuracies in the abstraction and coding process might have occurred. Third, differences by race and ethnicity could not be examined because of the high prevalence of missing race/ethnicity data (20.3%). Finally, data are based on information in the ED record and are not linked to other data sources (e.g., police reports or school disciplinary reports) that might provide additional information about the circumstances related to the injury or the relationship between the perpetrator and victim.

Although the number of young persons treated for nonfatal assault injuries in EDs is declining, and this trend is promising, these injuries remain common and costly. In 2015, approximately 485,610 young persons were treated for assault-related injuries, and associated medical and lost productivity costs were approximately $3.4 billion (1). These injuries continue to occur most often among males and among young adults aged 20–24 years, highlighting the groups that need to be reached with continued and enhanced prevention strategies. Violence among young persons is preventable with the implementation of evidence-based policies and programs that significantly reduce the risk for injuries and associated risk factors. CDC’s A Comprehensive Technical Package for the Prevention of Youth Violence and Associated Risk Behaviors (https://www.cdc.gov/violenceprevention/pdf/yv-technicalpackage.pdf) can help states and communities focus their collaborative action on strategies supported by the best available evidence (2).

The figure above is a line graph showing the nonfatal assault injury rate among persons in the United States aged 10–24 years who were treated in hospital emergency departments during 2001–2015, by sex.

The figure above is a line graph showing the nonfatal assault injury rate among persons in the United States aged 10–24 years who were treated in hospital emergency departments during 2001–2015, by age group.