*Jurisdictions refer to any of the 50 states, New York City, and the District of Columbia.

Make sure you are vaccinated against measles before traveling internationally.

For News and Media
Find supporting materials in the CDC Newsroom. 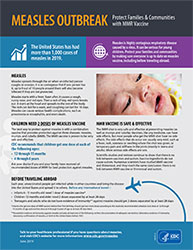 In a given year, more measles cases can occur for any of the following reasons:

Reasons for an increase in cases some years:

The U.S. experienced 17 outbreaks in 2018. Three outbreaks in New York State, New York City, and New Jersey, respectively, contributed to most of the cases. Cases in those states occurred primarily among unvaccinated people in Orthodox Jewish communities. These outbreaks were associated with travelers who brought measles back from Israel, where a large outbreak is occurring. Eighty-two people brought measles to the U.S. from other countries in 2018.

A 75-case outbreak was reported in Minnesota in a Somali-American community with poor vaccination coverage.

The United States experienced a large (147 cases), multi-state measles outbreak linked to an amusement park in California. The outbreak likely started from a traveler who became infected overseas with measles, then visited the amusement park while infectious; however, no source was identified. Analysis by CDC scientists showed that the measles virus type in this outbreak (B3) was identical to the virus type that caused the large measles outbreak in the Philippines in 2014.

The U.S. experienced 23 measles outbreaks in 2014, including one large outbreak of 383 cases, occurring primarily among unvaccinated Amish communities in Ohio. Many of the cases in the U.S. in 2014 were associated with cases brought in from the Philippines, which experienced a large measles outbreak.

In 2011, more than 30 countries in the WHO European Region reported an increase in measles, and France was experiencing a large outbreak. These led to a large number of importations (80) that year. Most of the cases that were brought to the U.S. in 2011 came from France. For more information see Measles — United States, January-May 20, 2011. 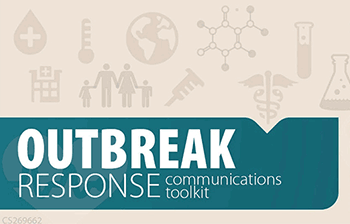