In 2003, CDC created NHBS to conduct behavioral surveillance among persons at high risk for HIV infection.

1) Gay, bisexual and other men who have sex with men; known as the MSM cycle.
2) Persons who inject drugs (PWID); known as the injection drug use or IDU cycle, and
3) Heterosexually active persons at increased risk for HIV infection; known as the HET cycle.

Before each NHBS cycle, formative assessment is conducted to learn more about each local population and to inform operational procedures. Venue-based, time-space sampling (VBS) is used during the MSM cycles. Health department staff identify venues frequented by MSM (e.g., bars, clubs, organizations, and street locations) as well as days/times when men frequent those venues. Venues (and specific day/time periods) for recruitment are chosen randomly each month. Respondent-driven sampling (RDS) is used during the IDU and HET cycles. Health department staff select a small number of initial participants, or “seeds,” who complete the survey and recruit their peers to participate. Recruitment and interviewing then continue until the target sample size is reached.

Trained interviewers in all NHBS project areas use a standardized, anonymous questionnaire to collect information on HIV-related risk behaviors, HIV testing, and the use of HIV prevention services. HIV testing is offered to all participants. During each cycle, a minimum of 500 eligible persons from each participating project area are interviewed and offered HIV testing. The first full round of NHBS, which comprised all three cycles (MSM, IDU, and HET), was conducted from 2003–2007. The second round was conducted from 2008-2010, the third from 2011-2013, the fourth from 2014-2016, the fifth from 2017-2019, and the sixth round begins in January 2020. See the table below for information about each round. 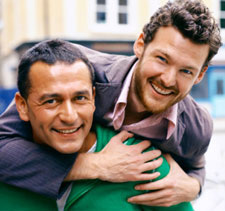 What data are collected?: NHBS (OMB No. 0920-0770external icon) collects data relating to behavioral risk factors for HIV (e.g. sexual behaviors, drug use), HIV testing behaviors, the receipt of prevention services, and use of prevention strategies (e.g. condoms, PrEP). In addition to these interview data, all NHBS participants are offered an HIV test.

Findings from NHBS are published in annual reports and other scientific publications.

How this surveillance contributes to HIV prevention: NHBS data are used to provide a behavioral context for trends seen in HIV surveillance data. They also describe populations at increased risk for HIV infection and thus provide an indication of the leading edge of the epidemic. Through systematic surveillance in groups at high risk for HIV infection, NHBS is critical for monitoring the impact of the National HIV/AIDS Strategy, which focuses on decreasing HIV incidence, improving linkage to care, and reducing disparities.