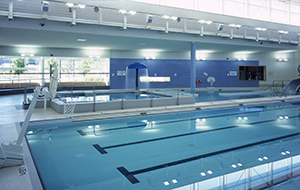 Chlorine is used in pools and other chlorinated aquatic venues to kill germs, but when it binds to the body waste swimmers bring into pools (for example, sweat and urine) it can form chemicals called chloramines. Chloramines in the water, like dichloramine and trichloramine, irritate skin, eyes, and the respiratory tract (including the nose) when they off gas from the water and into the air above, particularly indoors 1-3. In addition, chloramines can also contribute to corrosion of metals around the aquatic venue and in air handling systems.

What can pool operators do to prevent or get rid of chloramines?

Chloramines can build up in the water, which means they can build up in the air if there is not enough fresh air surrounding pools and other places people swim in chlorinated water 1. This is particularly true for indoor aquatic facilities where air handling systems are not bringing in enough fresh air and exhausting enough chloramine-polluted air, which is common during winter months when heating costs increase. Chloramines that off gas from the water are heavier than air. This means they settle on top of the water’s surface where they can cause negative health effects in swimmers and spectators.

Three things cause the buildup of chloramines in the air:

Air handling systems might remove moisture from the air, but they don’t necessarily bring in enough fresh air or exhaust enough air polluted with chloramines; pool operators need to consult with technical representatives on how to maximize the use of their air handling system to reduce chloramine accumulation while keeping heating costs down. If chloramines are not exhausted to the outside, then the recirculated air flowing over the water can become loaded with chloramines. If the air surrounding the water is full of chloramines, chloramines can’t off gas in the surrounding air. This means chloramines will build up in the water and cause health effects in the swimmers.

Encourage healthy swimming to prevent chloramines from forming by stopping pee, poop, urine, dirt, and sweat from entering the water in the first place.

Ensure that airflow in the swimming area is set up to minimize the buildup of chloramines in the air.