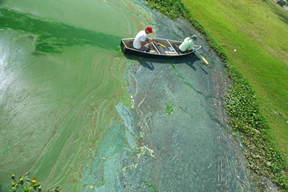 Boating in a lake with a HAB. Credit: Photo courtesy of Andy Reich.

A harmful algal bloom (HAB) can occur in water bodies around the world and can affect those who use these water bodies for recreation, agricultural, or drinking 1-4. People can be exposed to a HAB or HAB toxins when they swim, wade, or play in or near contaminated water; eat contaminated fish or shellfish; or use contaminated drinking water. The severity of illness and symptoms can vary depending on the type of exposure and the type of HAB toxin.

The main routes of exposure to HAB toxins are 5:

People can be exposed to a HAB or HAB toxins by inhaling (breathing in) tiny water droplets, mist, or sea spray from a contaminated body of water. This can occur even if a person does not go into the water 1. Further research is needed to better understand the effects of long-term inhalation exposure to HAB toxins, especially for those who regularly work on or near water, such as boaters or lifeguards 1-4.

Individuals who have been on the beach or on a boat during a marine HAB event have reported breathing difficulties after inhaling air or water particles contaminated with HAB toxins 1,5,6. A study conducted during a Florida red tide found that marine HAB toxins could be transported in the air almost 4 miles inland from the water source 7. A marine HAB may cover hundreds of square miles of ocean and affect boaters across the entire area.

People can swallow contaminated water while they are swimming or playing in the water. Active water sports (like water-skiing) pose a higher risk of accidental ingestion 1. Swimmers may swallow up to 16–200 mL of freshwater (the equivalent of 0.5 – 6.8 ounces of water) during one swim 2.

People and animals can be exposed to HAB toxins by eating fish or shellfish from a freshwater body with a HAB. Freshwater fish can become contaminated with cyanotoxins when they eat toxin-producing cyanobacteria 7.

People and pets might be exposed to HAB toxins through a contaminated tap water supply, though this is still an uncommon occurrence. Exposure to HAB toxins can occur in a healthcare setting, although this is also rare. This type of exposure can occur if patients receive a medical treatment, such as dialysis, that uses water that has not had HAB toxins removed. In 1974, 23 dialysis patients in Washington, DC, became ill when the local water source became contaminated with cyanotoxins, which are toxins from a type of phytoplankton called cyanobacteria 10. In 1996, 52 dialysis patients died and another 64 became ill in Brazil when the water used for dialysis treatment was contaminated with cyanotoxins 10.

The Environmental Protection Agency (EPA) suggests the risk of a HAB contaminating drinking water is increasing due to nutrient pollution of source waters 15 such as agricultural runoff of fertilizer containing phosphorus and nitrogen, which are nutrients that promote algae growth.

Water treatment facilities have options to remove cyanobacteria and their toxins from water during treatment. Coagulation, sedimentation, and filtration have been shown to remove between 90 and 99.9% of algae 14. However, when algae begin to die, toxins contained in the algae can be released from the algal cells 15,16. These toxins may not necessarily be removed through coagulation, sedimentation, or filtration of the water 19. However, the toxins released by algae can be treated through other processes, such as activated carbon filtration and oxidation 16. These methods are not always a part of water utility treatment processes You can find out more about your local drinking water on EPA’s website.External

Nutritional supplements that contain algae can also pose a risk for exposure to HAB toxins. When algae are harvested to produce supplements, a toxin-producing cyanobacteria (such as Microcystis) might accidentally be collected as well 16,17.

In 1996 in Oregon, a HAB produced large amounts of the HAB toxin microcystin in Upper Klamath Lake 16. Oregon officials issued a precautionary advisory for supplements that used algae collected from the lake. The state established an allowable limit of 1 microgram of microcystin per gram of algal supplement 16. As a result of the advisory issued by state officials and consumer concern, 87 samples of algae supplements sourced from Upper Klamath Lake were tested, and 72% had levels of microcystin that exceeded this limit 16. New technologies have since been used for collecting algae to reduce the risk of taking toxic cyanobacteria from this lake 18.