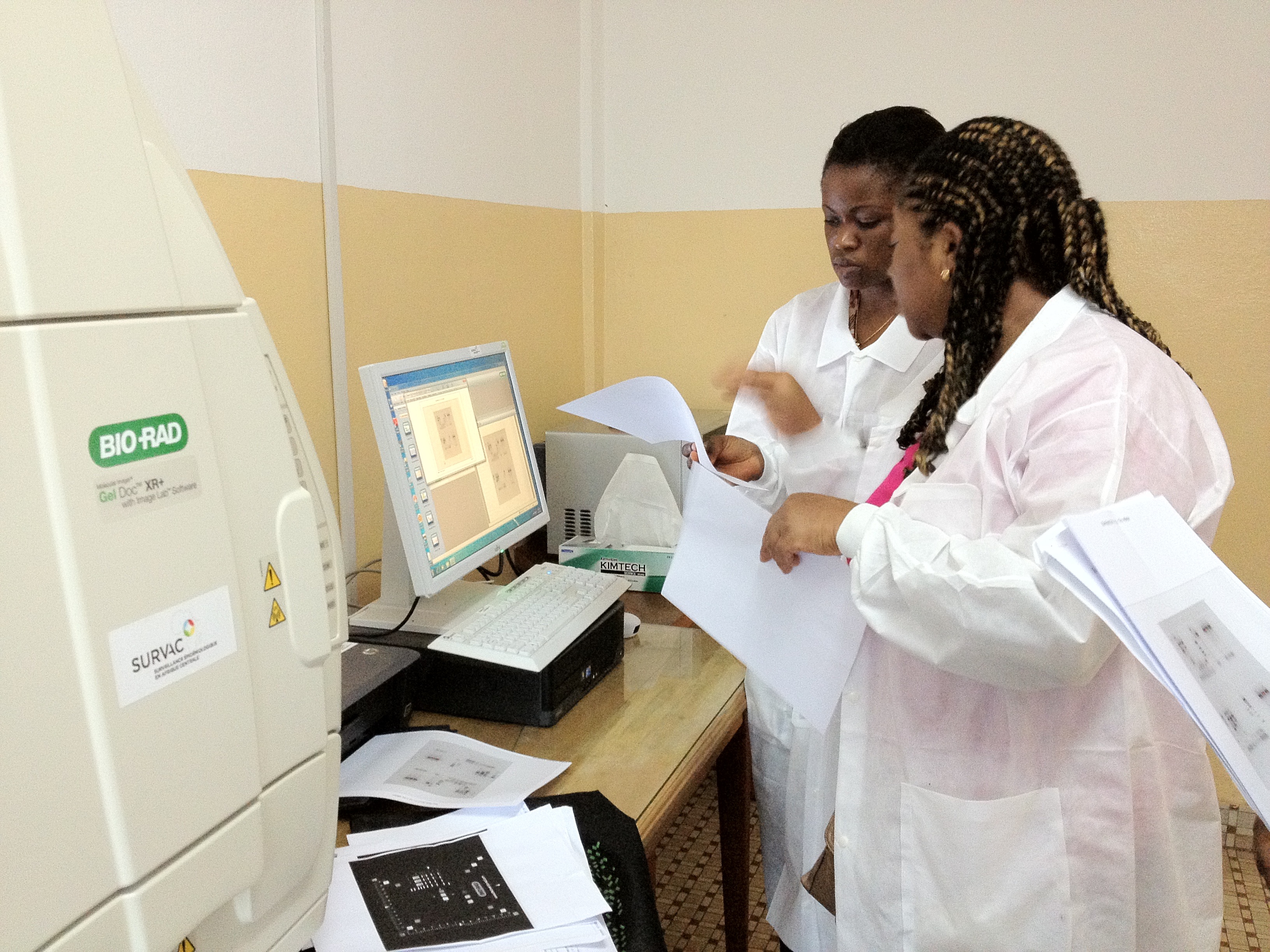 Elisabeth Pukuta Simbu is a biologist at the national laboratory in the Democratic Republic of the Congo where she and her colleagues detect devastating vaccine preventable illnesses such as rotavirus diarrhea and bacterial meningitis. Timely disease identification is essential when responding to public health threats, but until recently, Central African labs like Elisabeth’s had limited capacity to identify the strains of viruses and bacteria circulating in their countries. Every year, her lab received biological samples from the field, but without the ability to identify the strains, she and her colleagues had to pack up 50 or more samples and travel with them in their suitcases to better equipped labs in Gambia and South Africa where they could be processed. Without any viable alternative, this inefficient and costly system repeated itself year after year.

Without the necessary equipment and training to conduct essential laboratory tests, a backlog of samples built up, and health systems in these countries were left without critical information about which pathogens were circulating, and which populations were at risk of infection and death. Without this information, health workers could not effectively plan for programs to prevent illness – even for diseases like rotavirus diarrhea and meningitis A, which are preventable with safe and effective vaccines.

Fortunately, today Elisabeth’s lab (and others like hers) is fully functional, and her staff can properly detect illnesses such as rotavirus diarrhea and bacterial meningitis, identify circulating strains and quickly share information with decision-makers. Through a program called SURVAC, created in collaboration with Central African Ministries of Health and the World Health Organization and made possible through funding provided by the Bill and Melinda Gates Foundation through the CDC Foundation, CDC provided Elisabeth and her laboratory staff with new equipment, supervisory support and hands-on skills training.

SURVAC is a French acronym that stands for Strengthening Surveillance and Response in Central Africa. The five-year SURVAC program, based in Central Africa, has four components. The first three are: disease investigation and detection, laboratory skills and technology, and information technology. The fourth component is the Central African Field Epidemiology Training Program (CA-FELTP). FELTP is modeled after CDC’s Epidemic Intelligence Service, whose investigators have tracked down some of the most puzzling and deadly disease outbreaks in the world since the 1970s.

The SURVAC program is currently being implemented in three countries in Central Africa: Cameroon, Democratic Republic of the Congo (DRC), and the Central African Republic (CAR). These countries were selected because they face multiple health challenges: high rates of infant and child deaths, weak health systems, limited public health workforces, and a need to strengthen their abilities to detect and respond to disease outbreaks. The project is pioneering in its collaborative approach which brings together expertise from several Centers and programs within the CDC, including the National Center for Immunization and Respiratory Diseases, the Center for Global Health’s Field Epidemiology Training Program, and the Global Immunization Division.

SURVAC participants build skills by receiving mentoring from CDC, attending workshops, in-country trainings and taking refresher courses. Mentoring consists of ensuring that the laboratories maintain quality standards and assessing participant’s abilities to perform necessary laboratory procedures. Participants are given feedback so that they can continually improve and perfect their skill sets.

A key goal of the SURVAC program is to mobilize and empower health workers in Central Africa to effectively detect and report diseases. Reporting disease information allows for the planning of quality prevention programs targeted where they are most needed – all within the context of health systems with very limited resources.  SURVAC also empowers participants to play a greater role in shaping policies that have immediate benefits for children in their countries. When a participant in Central African Republic asked Lila Rahalison of CDC’s Division of Bacterial Diseases why so many improvements were needed in the lab, she explained that better surveillance would help decision makers with vaccine implementation. Then the lab technician replied, “Oh, so a laboratorian takes part in the future of our kids. That’s very rewarding!”

Originally, one focus of SURVAC was on the surveillance of two diseases: rotavirus diarrhea and serogroup A meningococcal meningitis. Rotavirus diarrhea causes upwards of 1,200 child deaths each day. Similarly, meningococcal meningitis affects mostly children and young adults and is all too common. Individual outbreaks occur frequently in the Central African region and can cause tens of thousands of deaths in a span of weeks. The skills SURVAC participants learn (see box below) can be used to detect these two diseases, but can also be applied to a host of other diseases. In fact, SURVAC participants have been instrumental in responses to several disease outbreaks since the project began, including cholera, polio and malaria.

SURVAC participants have gained a host of scientific and technical skills—what have they been up to?

In addition to upgrading their laboratories with modern equipment, the SURVAC program facilitated an improved the laboratory network and put in place a formalized protocol for bacterial meningitis and rotavirus diarrhea surveillance. Additionally, local teams meet regularly to review and organize data. These advancements in each of the three SURVAC countries have resulted in improvements in disease detection, tracking and reporting. An example from Cameroon showcases the impact of the SURVAC program. As a result of being able to scientifically demonstrate the impact of rotavirus diarrhea on the nation’s children for the first time, Cameroon successfully applied for funding from the GAVI Allianceexternal icon to introduce rotavirus vaccine into their national immunization program. This kind of accomplishment will save countless lives and strengthen the health security of both the Central Africa region and the world at large. Cameroonian staff like Valentine Ngum Ndze are hopeful: “We are really lucky, because we will have baseline data when we introduce the rotavirus vaccine.” Having baseline data is a powerful tool allowing health workers to look back after introducing a new vaccine and evaluate the impact on illness prevented and lives saved, and to learn from the experience in order to improve future activities.

The Central African Republic has also shown remarkable progress. For example, in 2011, after almost a decade without any known cholera infections, an outbreak occurred. CAR-FELTP residents, through SURVAC, played an important role in confirming the outbreak, identifying risk factors, assessing preparedness in the affected districts, and implementing control measures. The residents who conducted the outbreak investigation used their new skills to write a report pdf icon[PDF – 1.31MB]external icon detailing the outbreak investigation. The sharing of information for regional collaboration is an example of SURVAC’s objectives coming to fruition. 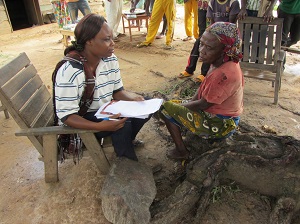 Additionally, CA-FELTP residents have been engaged in several outbreak investigations including suspected malaria in Cameroon and DRC, yellow fever in CAR, and monkeypox in DRC. FELTP residents in Cameroon have also made important contributions in the polio outbreak and response activities beginning in October 2013. As representatives of the Ministry of Health, 11 CA-FELTP residents were part of multiagency teams involved in planning interventions, assessing the preparations of the several planned polio vaccination drives, supervising and monitoring the vaccination drives in six regions, and conducting surveys to determine how many children were immunized during the vaccination campaigns.

Health workers in these low-income countries are finally accessing the resources, training and supervision necessary to reach their full potential. Els Mathieu, a CDC epidemiologist who mentors SURVAC participants for disease detection and outbreak investigation, feels extremely proud of the program, saying “[it has been] very useful and successful in building the capacity of the trainees.” She enjoys teaching staff to propose feasible recommendations to improve public health and present them to their colleagues. According to Ben Dahl, another CDC epidemiologist involved with SURVAC, “The communities as a whole have benefited from the increased tracking of diseases, as the Ministries of Health can plan better. At the community level there is not a need to wait for the Ministry of Health to tell them what the public health problems are.” CDC and partners are proud to facilitate the use of data in planning targeted public health programs at the local level.

Strengthening the surveillance capacity of these countries so that they feel capable and confident about effectively managing outbreaks and detection of vaccine-preventable and other diseases is a work in progress, and the SURVAC project is just a start.  The hope is that lessons learned through SURVAC will extend long beyond the program’s five-year funding cycle. Public health workers in the participating countries are developing the capacity to independently detect, track and report illnesses, report surveillance data, and write and submit grant applications in order to obtain funding to sustain these gains. These are skills that will help them effectively respond to and prevent outbreaks in the future.

Outbreaks in Central Africa may seem unrelated to health in other parts of the world, but the truth is we are all interconnected. At a time when people travel far and frequently, disease agents have the potential to travel with them. Consequently, improved health security and investments in the Central Africa region is essential not only for local disease detection and prevention, but for global health security as well.