Measles remains one of the most contagious diseases in the world.  Vaccinating children on-time and ensuring that each gets two doses of measles vaccine is critical to eliminating this deadly disease.

The technology for vaccinating people against measles is almost the same as it was 50 years ago – a freeze-dried powder vaccine that requires continuous refrigerated storage, liquid reconstitution prior to use, and a needle-and-syringe injection. But thanks to researchers at CDC and Georgia Tech, all that could change.

The breakthrough is called a “microneedle patch.” And as the saying goes, great things come in small packages, and the enthusiasm – and the promise for public health – is enormous.

Proving that size does matter, microneedle technology would overcome a multitude of challenges associated with traditional methods of vaccination and help provide measles vaccinations to millions of people in remote and resource-limited settings.

The microneedle prototype is a collection of dozens of tiny needles that are lined up on a small patch. The needles are so tiny that each one is measured in micrometers and is as thin as a human hair. Dr. Mark Prausnitz is a professor in the Georgia Tech School of Chemical and Biomolecular Engineering, and co-developer of the microneedle. He believes that, “A major advantage of the microneedle patch would be the ease of delivery.”   Rather than the vaccine coming in a vial that must be drawn up by needle-and-syringe for injection, the microneedle patches come with the vaccine encapsulated within the dissolvable microneedles and are simply placed on the skin. It’s much like putting on a Band-Aid, and the pain that comes with current subcutaneous injections is bypassed. The polymer microneedles then dissolve between layers of the skin, effectively delivering the vaccine.

James Goodson, a CDC epidemiologist specializing in vaccine-preventable diseases, suggests that the compact packaging and simple administration of the microneedle patches could improve vaccination coverage levels that have stagnated in recent years.  He notes that a key success of the global polio eradication efforts is the simplified logistics of oral polio vaccine that allows health workers to travel door-to-door to administer the vaccine instead of hoping that parents bring their children to clinics. Microneedle patches hold the promise of similar simplified logistics that would greatly boost measles elimination efforts.

Traditional measles vaccine requires large refrigerated storage facilities and forces vaccinators to provide services at fixed immunization posts rather than offering mobile services in the community. Also, the vaccine used is relatively fragile and doesn’t travel well; it is very heat- and light-sensitive, and it needs to be kept cold at all times to maintain its potency. That’s not a problem in high-income countries where electricity and refrigeration are both abundant and reliable. But in developing countries, these resources are sometimes limited or unavailable.

Research at CDC and Georgia Tech shows that the microneedle patch containing measles vaccine can remain stable at higher temperatures and for longer periods than the typical injectable vaccine. This makes the logistics of transportation and storage more manageable, even in remote or rural areas without access to continuous refrigeration. 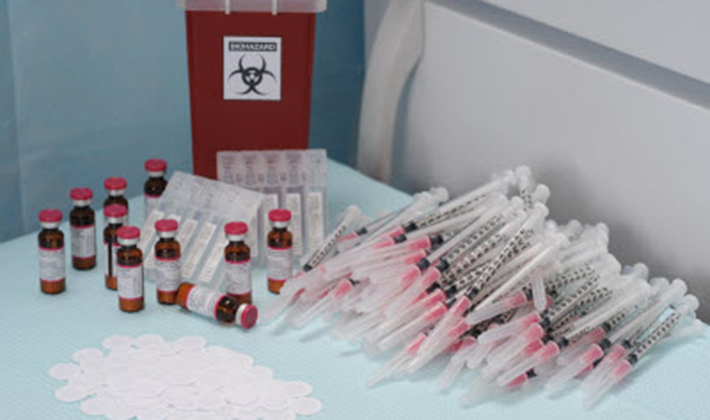 100 microneedle patches in the foreground. In the background, 100 needles and syringes, 10 ten-dose vials of measles vaccine with diluent, a biohazards box for sharps waste disposal, and a refrigerator for cold chain storage. (Credit: Gary Meek, Georgia Tech)

The United States has not had a home-grown case of measles since 2000, and measles has been eliminated in the Western Hemisphere since 2002.  But in other parts of the world, where gaps in immunization remain, measles is still a looming threat that kills 400 children each day. That number won’t decline unless improvements are made in reaching children with routine immunizations. The microneedle patch could allow for improved vaccination coverage in the routine clinics. In countries such as the United States, high coverage with measles vaccine has been achieved through the routine immunization system, supported by school entry requirements.

With the traditional method, a syringe is inserted into a vial to draw up a diluting solution (sterile distilled water) which is then injected into a second vial containing the vaccine. Once properly mixed, the vaccine must be drawn up again before it is injected into the arm.  Dr. Paul Rota, a CDC virologist, emphasizes that each step must be carefully executed to avoid contamination and preserve the potency of the vaccine.  Afterwards, the health worker must be sure to safely dispose of the used needle and syringe.

Vaccination with microneedle patches is easy and requires minimal training of health workers. Furthermore, because the needles dissolve into the skin, vaccinators are free from the worry and dangers of handling or disposing of used sharps.

With the traditional method, in much of the world, the measles vaccine comes in 10-dose vials. Goodson refers to the multi-dose arrangement as “dinosaur” packaging, because the idea hasn’t changed much since the vaccine was first introduced in 1963, unlike the single-dose packaging that is common for newer vaccines. With multi-dose vials, if only a few persons visit a health facility for a routine measles vaccination, the remaining vaccine doses in the vial must be disposed of, because it loses its effectiveness six hours after being prepared. 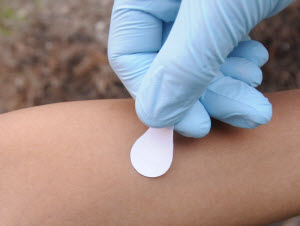 Administering measles vaccine with a microneedle patch is about as easy as it gets. (Credit: Gary Meek, Georgia Tech)

Using microneedle patches would reduce vaccine wastage, because all vaccine would come in individual doses, meaning that each package opened will be put to good use.

Researchers believe measles will be only a test run for a much larger and successful application of the technology. Ultimately, they say, the microneedle patch could vastly improve vaccine coverage, which is a necessary component of worldwide measles eradication. Protection from measles and rubella (another highly contagious viral infection that causes rash and fever) is often provided through a combined measles and rubella vaccine (MR), so for the microneedle benefits to be of practical use, a combined microneedle patch vaccine would need to be developed.  With these benefits in mind, CDC and Georgia Tech are conducting further research to create a combined MR microneedle vaccine, with the hope to begin using it to create a measles- and rubella-free world.

Thus far, measles vaccine delivered by microneeedle patch has proven to be both safe and effective in laboratory animals. To learn more about the progress of this Georgia Tech-CDC collaboration, read the latest article about the study in Vaccine: A microneedle patch containing measles vaccine is immunogenic in non-human primates.