The health and economic impact of the COVID-19 pandemic has illustrated why every country must improve their ability to detect and rapidly respond to deadly infectious disease outbreaks. CDC’s Division of Global Health Protection (DGHP) leads implementation of global health security (GHS) activities to do this, helping countries strengthen health systems, build outbreak response capacity, and meet international standards under the International Health Regulations (IHR).

In addition to working with countries to build GHS capacity, DGHP also produces tools to help countries identify areas where they lack capacity and develops approaches countries can use to plan and implement activities to address these gaps. These tools are a good example of what global health experts refer to as the “global health security architecture.” They are part of a support system that helps countries build their capacity to identify outbreaks and prevent outbreaks from potentially turning into pandemics. The support system consists of the following elements:

DGHP, in conjunction with CDC partners, worked closely with the World Health Organization to develop the Joint External Evaluation (JEE), a tool that more than 110 countries have used to assess their capacity and identify gaps, and National Action Plans for Health Security (NAPHS), plans to address the gaps and map out ways to address them. However, action to implement the plans has often been slow. Recognizing this, DGHP worked with the governments of Nigeria, Sierra Leone, and Uganda, as well as WHO and Resolve to Save Lives, to develop a planning approach that helps turn assessments into action. This planning approach included these key principals:

Stepwise Approach and Activity Tracking Gets Uganda “Out of the Red”

CDC has worked with Uganda for years to develop this new approach. DGHP supported Uganda as they piloted an early version of the JEE, and later when they conducted an official JEE. They also helped Uganda launch the Kampala Declaration, a commitment to addressing their gaps, and worked with them to develop a National Action Plan for Health Security (NAPHS).

DGHP was there again when Uganda resolved to adopt a revised planning approach to implement their NAPHS. Uganda has focused at improving all areas that were identified in the JEE as having no or limited capacity (scores of 1 or 2 out of 5), known as the ‘reds.’ In a recent internal self-assessment, Uganda’s indicators scored with no capacity declined from 10% to 2%. Indicators scored with limited capacity declined from 30% to 20%. Uganda “Got Out of Red” in 4 indicators and increased capacity in 18 indicators in areas such as national laboratory systems, human resources, emergency preparedness, and border health.

This approach was particularly successful in improving preparedness at points of entry (airports and border crossings), which had received previously weak scores on their JEE. As part of this process, the Uganda Ministry of Health held a nationwide Ebola Virus Disease outbreak simulation exercise in April 2019 which included detection of Ebola in two major points of entry and one community. This simulation exercise identified critical gaps in their alert notification and communication to rapid response systems, and Uganda began implementing measures to improve these systems. Within two months, the field hospital which conducted the simulation exercise quickly detected an Ebola case. Uganda was able to quickly deploy rapid response teams and launch active surveillance and alert notification networks to prevent community spread. A potential Ebola epidemic was avoided, which Uganda credits in large part to the simulation exercise.

Sierra Leone also had difficulties implementing their NAPHS and realized that a new approach was needed to translate the plan into action. DGHP staff worked with the Government of Sierra Leone, WHO, and Resolve to Save Lives to implement a new annual approach to planning that has proven effective.  Since 2018, DGHP and partners have helped Sierra Leone use the JEE to conduct a self-assessment of their capacity and then hold a workshop where key activities to address the gaps are prioritized for the upcoming 6-12 months. Once the plan is developed, Sierra Leone uses an online activity monitoring system to track activities in the plan, enhancing their ability to quickly adapt when goals are not being met. Following this new approach, Sierra Leone improved the number of JEE indicators that were scored a ‘4’ (of 5) from 12% to 33% from 2018 to 2020 (see Figure 1 light green bars). Over the same period of time the number of indicators scored at a ‘1’ (of 5; dark red bars) decreased from 33% to 14%. These included improvements in areas such as surveillance, emergency operations and response, and medical countermeasures. 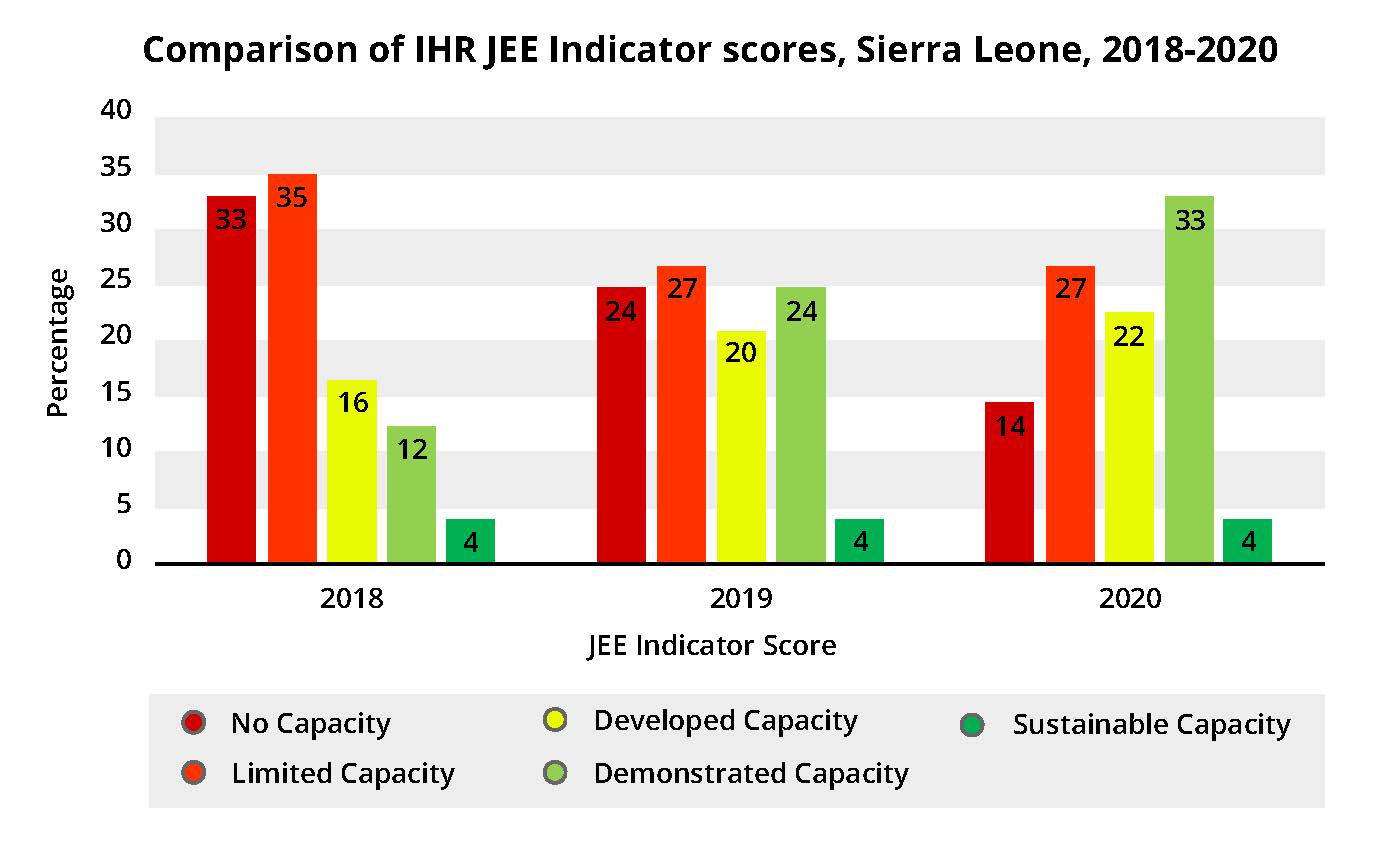 Figure 1. JEE Capacity Improvements after the Introduction of Operational Planning in Sierra Leone, 2018-2020. This figure shows the distribution of indicators at each JEE capacity score (1-5) and highlights the rapid improvement in Sierra Leone’s public health capacities over time.

The Government of Sierra Leone has now taken over this annual process and has continued to see significant improvements, including for emergency response. Despite the COVID-19 pandemic, Sierra Leone has now doubled the number of high-scoring JEE technical areas compared to when they launched the NAPHS in 2017. “Systems have been strengthened from previous operational planning, including integration of surveillance, labs, and animal health for improved detection and response mechanisms” noted one participant of the last planning meeting.

Dr. Mohamed Vandi, Director, Directorate of Health Security and Emergencies, Sierra Leone, noted a “Clear indication that the planning we have done has yielded much success. We are still a country with weak health structures, but we were able to [handle COVID-19] relatively better compared to other countries, because of the way we are strengthening our planning cycle to help the global health security agenda.”

The COVID-19 pandemic has shown the world that more work is needed to build capacity to manage infectious disease outbreaks globally. Global health security experts have acknowledged that translating plans into action is critical and CDC’s expertise in this area is crucial. As Mike Mahar, DGHP Lead for GHSA, notes, “When it comes to working with the U.S. administration and with WHO and global partners to promote health security, CDC has already helped build much of the architecture to improve GHS, and there is strong evidence that the tools and processes we’ve developed work. Encouraging countries to adopt this short-term approach to planning will help them move from identifying where gaps are to actually making progress to closing those gaps.”