CDC Zimbabwe continued to play a leading role in supporting the MoHCC’s strategic information activities in 2019 by providing technical leadership and programmatic guidance for routine monitoring and reporting, newly diagnosed HIV & recent infection surveillance, and health management information system support. In 2019, significant progress was made in transitioning from paper-based to electronic systems through CDC’s support towards developing a comprehensive EHR and LIMS. The long-term goal is to build integrated and interoperable electronic data collection systems that will feed into the District Health Information System (DHIS-2) national repository. 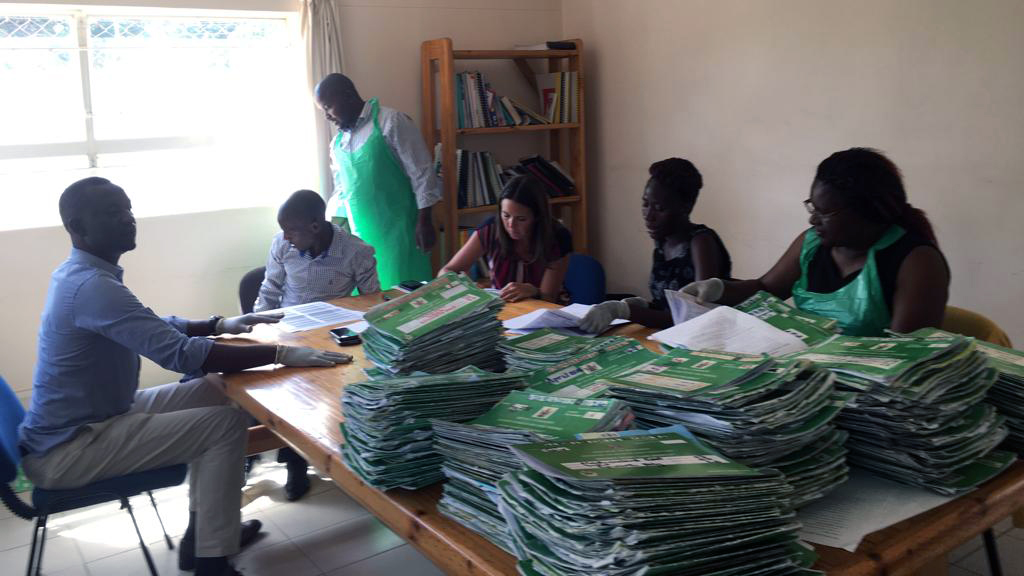 In order to ensure sites are reporting accurate information on the number of patients receiving HIV treatment, the MoHCC led a national data quality audit to update the number of PLHIV on HIV treatment as of Oct 31, 2018.  This activity took place between December 2018 and March 2019.  Each of the 1700+ sites were instructed to abstract a limited amount of information from each patient record including OI/ART number (unique ID), demographic information, date of ART initiation, most recent visit date, and next visit date.  Any additional information related to the status of the patient (documented transfer out, death, etc.) was also abstracted.  These data were critical for input into the Spectrum model which estimates the number and ages of PLHIV living in the 62 districts across Zimbabwe.  This information forms the basis for PEPFAR annual planning, helping the country team determine strategies to employee across the districts based on demographic factors associated with those not yet on HIV treatment.

CDC/PEPFAR worked with our clinical implementing partners to ensure a full listing of HIV patients was line-listed and transmitted to national level for the 1,129 PEPFAR-supported sites (449 CDC- supported sites). To verify the accuracy of the information, the CDC/PEPFAR teams led a national data validation exercise.  A sample of 10% of the PEPFAR-supported sites were visited by interagency PEPFAR teams compromised of at least 1 CDC and 1 USAID lead.  A manual recount of all active patient files was conducted onsite to validate the line-listed data from the visited site.  More than 200,000 patient files were reviewed as part of this initiative from 114 sites across 11 districts.  The activity took 12 weeks to complete and CDC Zimbabwe staff across all technical branches contributed more than 160 person-days.

This exercise validated the MoHCC ART census and confirmed the correct national number of patients receiving ART in Zimbabwe was not 1,172,978 as previously reported but 1,021,167 people.  Input of the corrected figure into a Spectrum re-run reduced the national PLHIV estimate from 1,361,055 to 1,315,645 a reduction of more than 45,000 people, suggesting a true ART coverage of about 77% at the time of ART census (October 2018).

Large changes in the estimated ART coverage occurred in several district which led to modifications in the case-finding strategies and allowed for PEPFAR programs to identify and initiate 100,601 newly diagnosed patients on treatment (47,985 through CDC-supported activities).  The CDC/PEPFAR implementing partners also used this exercise to improve their documentation processes at the supported sites and conducted rigorous trace-back of patients who had been identified as LTFU. At the end of 2019 the estimated national ART coverage in Zimbabwe is now 84%.

As Zimbabwe nears epidemic control, understating the demographic and sexual risk behaviors associated with those previously undiagnosed will be critical. We continue to modify case finding strategies to ensure each HIV-infected person has access to life saving treatment.  Utilization of the recently developed point-of-care HIV recency test allows for identification of individuals who acquired HIV infection in the previous 12 months.  While high-quality clinical care is provided to all HIV-infected persons regardless of the timing of infection, utilization of this experimental test for surveillance purposes can help identify areas of high HIV transmission as well as demographic or sexual risk behaviors of those most likely to acquire HIV.  Understanding geographic and demographic patterns of recent transmission will help ensure rapid extinguishing of HIV micro-epidemics through targeted case-finding and prevention efforts.  Moreover, identification of newly infected clients will become increasingly crucial to ensure epidemic control is maintained. As such, CDC has been working with the MoHCC to implement newly diagnosed surveillance and recent infection surveillance for HIV.

In 2019, four districts have been saturated with new infection and recent infection surveillance which include 135 sites across the country.  Demographic and sexual risk behavior has been collected on 6,429 newly diagnosed individuals with data transmission systems submitting electronically captured information in near real-time. These data populate national- and district- level dashboards that are routinely monitored for use in directing the MoHCC’s national HIV response.

Of the 5,366 people who have had a recent infection test done, 229 were identified to be recently infected.  This early data suggest that adolescent girls and young women are most likely to have a recent test result across all districts.  As such, we will scale up the Determined, Resilient, Empowered, AIDS-free, Mentored and Safe (DREAMS) programming in COP20 and strengthen counseling and PrEP provision to adolescent girls and young women to ensure we are targeting resources to have the greatest impact.

Between March and July 2019 CDC Zimbabwe through a partnership with ICAP at Columbia University conducted the first Integrated Biobehavioral Survey (IBBS) among MSM and transgender women/gender queer individuals (TGW/GQ) in Zimbabwe. Consenting participants from Bulawayo and Harare completed a questionnaire on sociodemographic and HIV risk behaviors and underwent biomarker testing including rapid testing for HIV, hepatitis B (HBV), and syphilis, and if testing HIV-positive, were tested for Cluster of differentiation 4 (CD4), viral load, and recent HIV infection. Consensus Population Size Estimates (PSE) of 15,875 (95% CI: 11,907 – 19,843) and 7,451 (95% CI: 6,353 – 8,549) were calculated for Harare and Bulawayo respectively.

Using respondent driven sampling (RDS) we recruited 1,538 MSM and TGW/GQ individuals. HIV prevalence among consenting participants was 17.1% in Harare and 23.3% in Bulawayo. HIV prevalence among MSM and TGW/genderqueer were higher than that in the general male population aged 15-64 years in both Harare and Bulawayo, which are 11.1% and 16.1%, respectively. Viral suppression among all HIV-positive participants was 69.0% in Harare and 61.6% in Bulawayo, which is well below the UNAIDS 90/90/90 target of 73%. Current PEPFAR programming in Zimbabwe aims to serve MSM and TGW/GQ individuals at private clinics. However, nearly 70% of IBBS participants reported that they prefer to seek services at public hospitals and clinics. Given the HIV prevalence of the study population and lack of viral suppression, a shift in how we cater to this vulnerable population is warranted.

In response to a recurring cholera and typhoid outbreak in Harare, the MoHCC conducted an oral cholera vaccination (OCV) campaign and typhoid conjugate vaccination (TCV) campaign in selected areas in and around Harare most heavily affected by the outbreak. From October 3–31, 2019, 1,296,270 OCV doses were administered to persons ≥ 1 year old in 3 phases, and from February 25–March 4, 2019, approximately 320,000 TCV doses were administered to persons ≥ 6 months old. Both vaccination campaigns were the first large scale campaigns for OCV and TCV conducted in Zimbabwe. The TCV vaccination campaign was the first mass-campaign for TCV in Africa. The MoHCC, CDC, WHO and Zimbabwe National Statistics Agency (ZIMSTAT) conducted coverage surveys for OCV in December 2018 and for TCV in April 2019 to assess each vaccination coverage among persons eligible to have received respective vaccinations. Additionally, a classification survey for TCV was conducted in Mbare to classify TCV vaccinations among adults aged 16-45 years.  As CDC Zimbabwe, we supported the preparation, coordination and implementation of the coverage surveys, and conducted field monitoring during data collection.

In the OCV coverage survey, a total of 2,355 OCV-eligible individuals from 850 randomly selected households in 16 suburbs participated. Overall, one-dose OCV coverage following the vaccination campaign was 71% (95% CI: 67%-76%). Most respondents reported receiving information before being vaccinated. The most common reason for not receiving OCV was being absent during the campaign.

In the TCV coverage survey, 1,920 children from 952 households in the 9 suburbs and 298 adults from 135 households in Mbare participated. Overall TCV coverage among all children aged 6 months–15 years was 85.3% (95% CI: 82.1%– 88.0%). A total of 192 adults in Mbare reported being vaccinated, resulting in a point estimate of 64.6%. Among children, the most common reason for not receiving TCV was being absent during the campaign whereas among adults, the most common reason for non-vaccination was not being aware of the campaign.  Both the OCV and TCV coverage surveys found that OCV and TCV campaigns in Harare were well-accepted and achieved highest coverage among school-aged children. 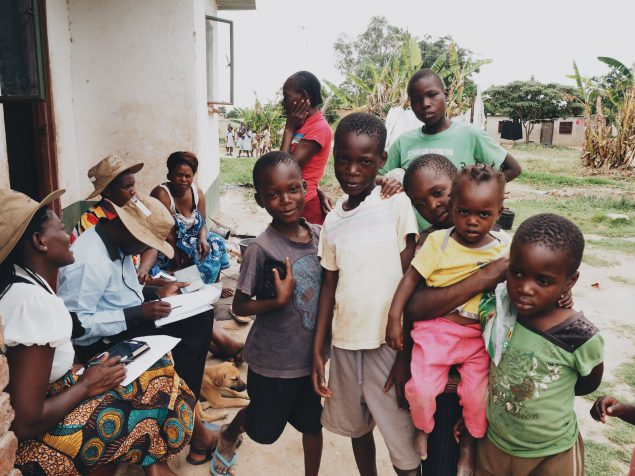 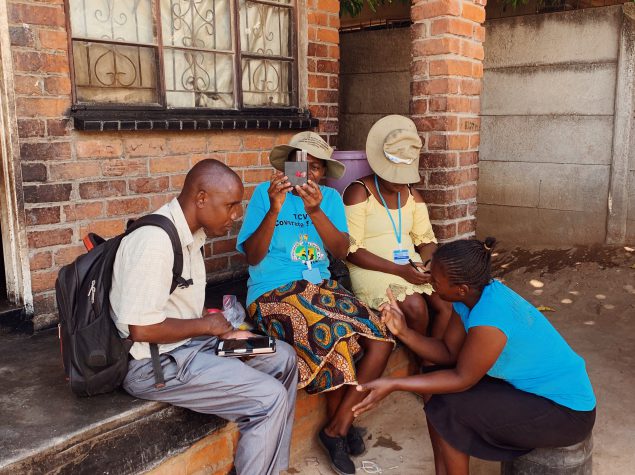 ZIMPHIA 2015–2016 was the first of 14 AIDS indicator surveys funded by PEPFAR to better understand the impact of countries’ national HIV programming on the epidemic, to gather bio-behavioral data about the subset of the population not accessing HIV health services, and to generate high quality data for policy and program decision-making.

ZIMPHIA was led by the government of Zimbabwe through the MoHCC and conducted with funding from PEPFAR and technical assistance through the CDC. The survey was implemented by ICAP at Columbia University and ICAP Zimbabwe in collaboration with Westat and local partners, including the National AIDS Council, the Zimbabwe National Statistics Agency, the Biomedical Research and Training Institute, and Lancet Laboratories Zimbabwe. Utilizing robust community mobilization strategies and innovative tablet-based data collection methods and laboratory techniques, over 29,500 participants of all ages tested for HIV and received their results in ZIMPHIA 2015-2016.

The final report, released in August 2019, shows that the HIV prevalence in Zimbabwe has decreased from 15.2% in 2011 (ZDHS 2010–2011) to 13.4% (ZIMPHIA 2015–2016) among 15–49 year olds in Zimbabwe. The face of the epidemic has also changed. PLHIV are living longer, healthier lives, and the number of new infections annually has decreased since the early 2000s. ZIMPHIA confirmed that Zimbabwe has reached a turning point where generalized interventions may no longer impact the HIV epidemic as in previous years. Manuscripts on a host of topics (e.g. HIV incidence, syphilis infection, factors associated with absence from the clinical cascade, etc.) are being published, and more are currently being prepared.

For more information and results from ZIMPHIA 2015–2016, visit http://phia.icap.columbia.eduexternal icon.

ZIMPHIA 2020 began data collection in November 2019. The data collection timeline has been expedited to span over 6 months, as compared to the yearlong timeline implemented in ZIMPHIA 2015–2016. Data produced in ZIMPHIA 2020 will allow the Zimbabwe MoHCC to assess progress made towards the achievement of the UNAIDS 90-90-90 targets on a national level since ZIMPHIA 2015–2016. These results will further support their endeavor to end AIDS in Zimbabwe by 2030, by allowing for data-driven decision making, targeted prevention activities, and cost-effective solutions that will have the greatest impact on both key populations and the general Zimbabwe population.

Objectives of the survey are to estimate the HIV incidence, HIV prevalence, prevalence of viral-load suppression (VLS) among HIV-positive individuals, and other HIV-related measures such as prevalence of detectable ARVs, prevalence of transmitted HIV Antiretroviral (ARV) drug resistance (DR), and DR amongst persons not virally suppressed.  In addition, the survey will collect information on uptake of, and access to, HIV-related services and will estimate the prevalence of select behaviors associated with HIV acquisition and/or transmission and on common HIV co-morbidities. The data generated in ZIMPHIA 2020 on HIV prevalence, incidence and testing status will be comparable to ZIMPHIA 2015–2016 and other country specific population-based surveys, and will produce information on the older age groups that are not usually covered by the Demographic and Health Survey (DHS) and other household surveys. It will also generate information on the impact of HIV care and treatment programs on population-level VLS, the coverage and uptake of various HIV prevention, care and treatment services, and the continuum of care in major HIV programs such as prevention of mother-to-child transmission (PMTCT) and linkage to care. Preliminary data are expected to be available by World Aids Day 2020.