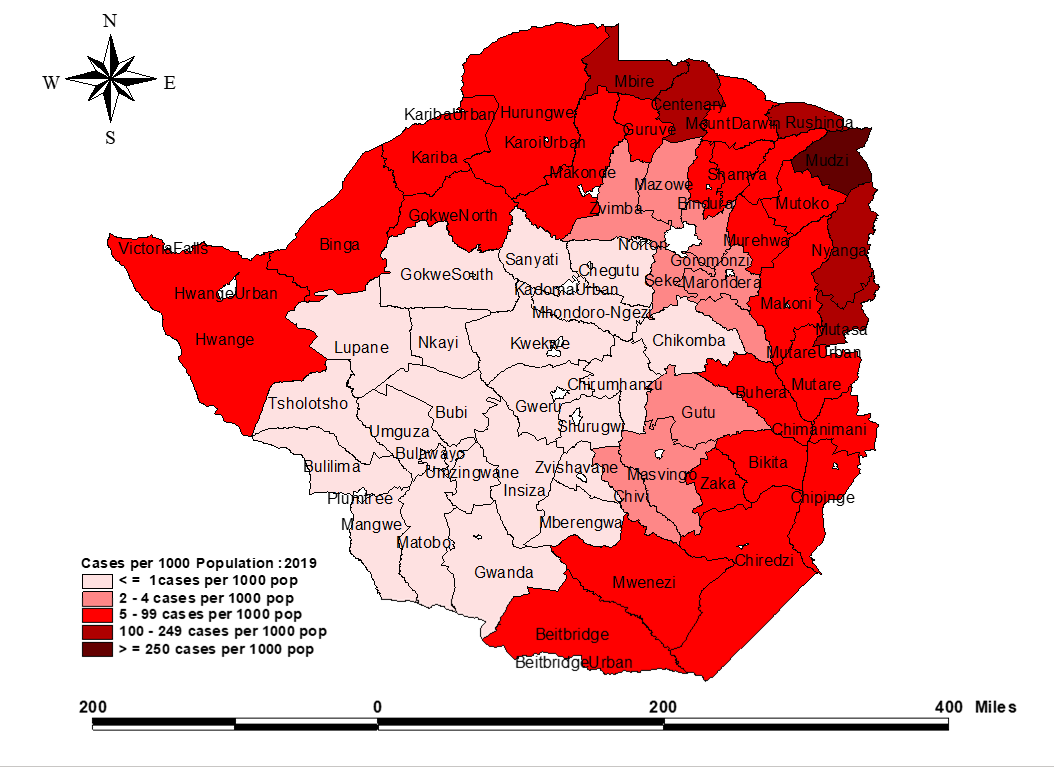 Zimbabwe has made substantial progress in reducing malaria incidence compared to levels recorded a decade ago. However, in more recent years, the annual number of reported malaria cases has fluctuated between approximately 250,000 and 500,000 cases, with no sustained downward trend.  According to DHIS2 data, approximately 310,000 malaria cases were reported in 2019, equivalent to an incidence rate of 22 cases per 1,000 population.  This represented a 19% increase in the number of cases reported in 2018 (approximately 260,000).   The number of malaria deaths also rose, from 236 in 2018 to 266 in 2019.

The U.S. President’s Malaria Initiative (PMI) was launched in Zimbabwe in 2011. PMI is led by the USAID and implemented together with CDC. CDC Zimbabwe is determined to support PMI/Zimbabwe’s efforts to further reduce malaria transmission.  As a member of the PMI interagency team, the PMI/CDC Resident Advisor works closely with USAID staff to provide well-designed and technically sound support for the Government of Zimbabwe’s malaria prevention and control efforts.  PMI Zimbabwe provides financial and technical support for a wide range of major malaria interventions, including: entomological monitoring, vector control [insecticide-treated mosquito nets and indoor residual spraying (IRS), malaria in pregnancy, case management, pharmaceutical and supply chain management, surveillance, monitoring and evaluation, operational research, and social and behavioral change communication.  Portions of this support are directed to the central and national levels (e.g., technical assistance to central level MoHCC staff, laboratory capacity building, and procurement of malaria commodities for nationwide distribution), while other components are targeted directly to the provincial and district levels (e.g., malaria case management and IRS). PMI’s provincial and district-level support has primarily targeted higher-burdened areas located in the northern and eastern parts of the country (See Figure 13 ).  Under the strong leadership of the National Malaria Control Program (NMCP), PMI support contributed greatly to the overall reduction in malaria burden and, as a result, PMI continues to primarily direct resources to these higher burdened areas. However, Zimbabwe experiences the full spectrum of malaria transmission, including areas with very limited transmission in the central plateau and south-western portions of the country. Beginning in FY18, PMI directed limited support for NMCP-driven elimination activities in these areas.