Sporotrichosis (also known as “rose gardener’s disease”) is an infection caused by a fungus called Sporothrix. This fungus lives throughout the world in soil and on plant matter such as sphagnum moss, rose bushes, and hay.1,2 People get sporotrichosis by coming in contact with the fungal spores in the environment. Cutaneous (skin) infection is the most common form of the infection. It occurs when the fungus enters the skin through a small cut or scrape, usually after someone touches contaminated plant matter. Skin on the hands or arms is most commonly affected. 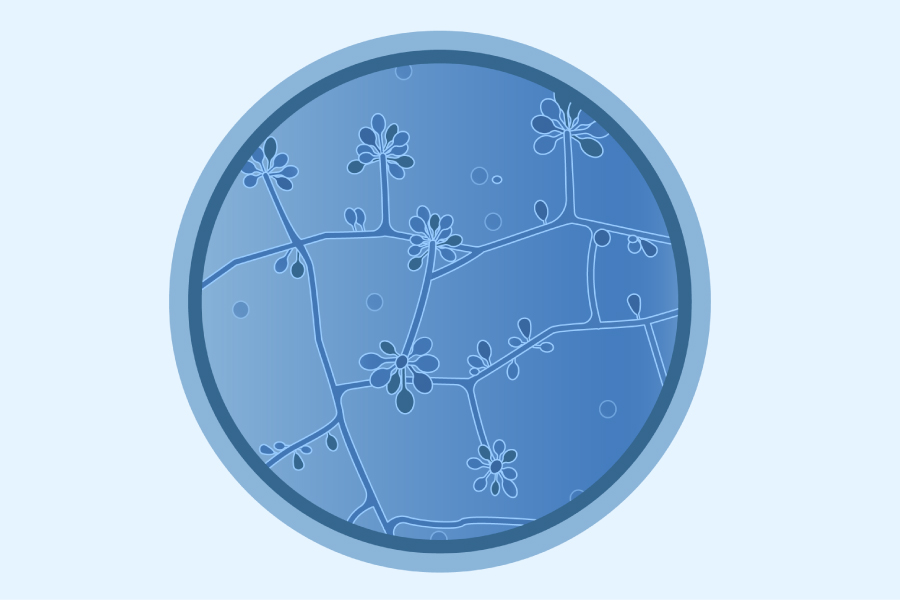 Sporotrichosis has been caused by scratches or bites from animals, particularly cats. Learn more about Sporothrix brasiliensis, a fungus that cats are spreading in Brazil and other areas of South America.

The symptoms of sporotrichosis depend on where the fungus is growing in the body. Contact your healthcare provider if you have symptoms that you think are related to sporotrichosis.

Sporotrichosis usually affects the skin or tissues underneath the skin. The first symptom of cutaneous (skin) sporotrichosis is usually a small, painless bump that can develop any time from 1 to 12 weeks after exposure to the fungus. The bump can be red, pink, or purple, and usually appears on the finger, hand, or arm where the fungus has entered through a break in the skin. The bump will eventually grow larger and may look like an open sore or ulcer that is very slow to heal. Additional bumps or sores may appear later near the original one.

Symptoms of disseminated sporotrichosis depend on the body part affected. For example, infection of the joints can cause joint pain that may be confused with rheumatoid arthritis. Infections of the central nervous system can involve difficulty thinking, headache, and seizures. 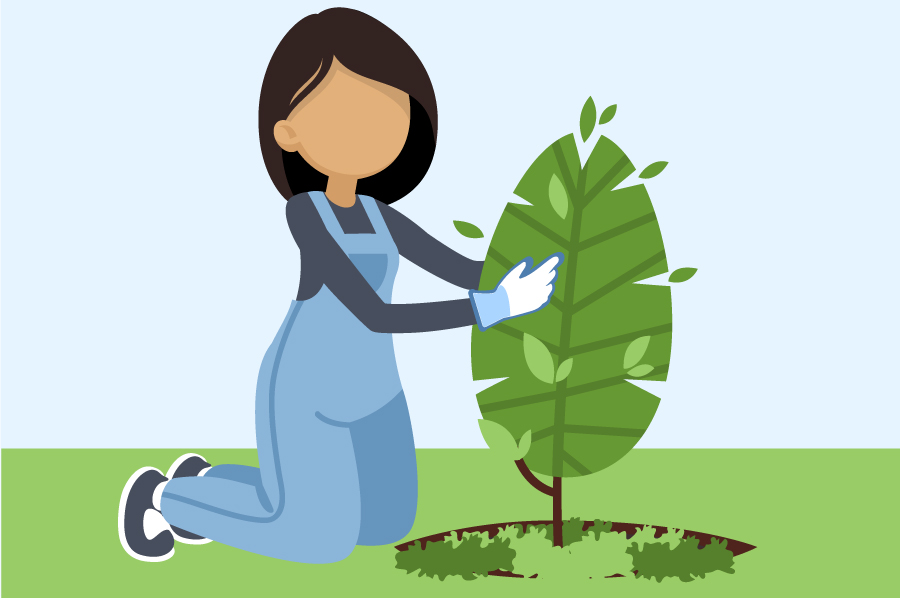 People who touch plant matter such as sphagnum moss, rose bushes, or hay are more likely to become infected. For example, sporotrichosis outbreaks have occurred among forestry workers, people who work in tree nurseries and garden centers, and people who handle hay bales.

The severe forms of sporotrichosis (those that affect the lungs, bones or joints, or central nervous system) usually affect people with weakened immune systems or other diseases including diabetes, chronic obstructive pulmonary disease (COPD), alcoholism, or HIV.1,3,4

How can I lower the chance of developing sporotrichosis?

You can lower the chance of getting sporotrichosis by wearing protective clothing such as gloves and long sleeves when touching plant matter that can cause minor cuts or scrapes.

In Brazil, people have gotten sporotrichosis from contact with cats. This form of sporotrichosis (Sporothrix brasiliensis) has not been found in the United States. Be careful with unfamiliar animals, particularly cats. Cat bites and scratches can spread the fungus that causes sporotrichosis, and other diseases. This fungus is most often spread by stray cats and pet cats that are allowed outdoors. Learn more about sporotrichosis from cats.

Where Sporotrichosis Comes From 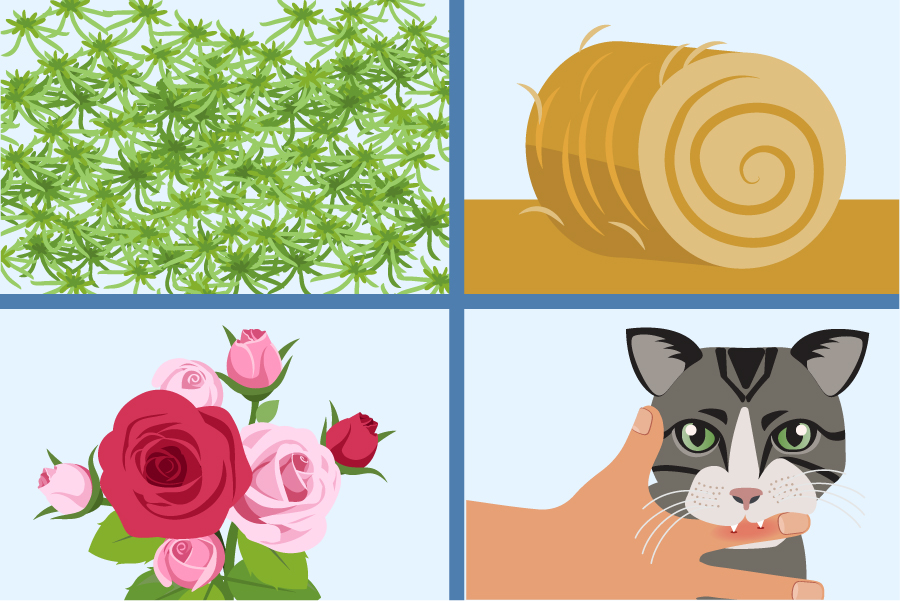 The fungus that causes sporotrichosis lives in the environment.

Sporothrix, the fungus that causes sporotrichosis, lives in the environment in soil and on plant matter such as sphagnum moss, rose bushes, hay, or wood. The microscopic fungus can enter the skin through small cuts or scrapes. In rare cases, breathing in the fungus can cause a pulmonary (lung) infection. The type of sporotrichosis found in North America is not contagious and can’t spread from person to person. However, in South America, a type of sporotrichosis caused by Sporothrix brasiliensis spreads through scratches or bites from animals, particularly cats. (This fungal illness is not cat-scratch disease, a bacterial illness spread by cats – which occurs worldwide, wherever cats live.)

Your healthcare provider will take a small tissue sample (biopsy) of the infected area of the body for laboratory tests. The laboratory will usually perform a fungal culture to find out what is causing the infection. Blood tests can help diagnose severe sporotrichosis, but usually can’t diagnose skin infections.

Most cases of sporotrichosis only involve the skin or the tissues underneath the skin. These infections are not life-threatening, but must be treated with prescription antifungal medicine for several months. The most common treatment for this type of sporotrichosis is itraconazole, taken by mouth for 3 to 6 months. Supersaturated potassium iodide (SSKI) is another treatment option for skin sporotrichosis. SSKI and azole drugs like itraconazole should not be used if you are pregnant.

If you have severe sporotrichosis that affects your lungs, bones, joints, or central nervous system, you’ll probably receive intravenous amphotericin B medicine, which is given through a vein. After the first treatment with amphotericin B, you may receive itraconazole by mouth, for a total of at least 1 year of antifungal treatment. People with sporotrichosis in the lungs may also need surgery to cut away the infected tissue.

Diagnosed sporotrichosis is rare, but the number of cases is difficult to determine because there is no national surveillance for it in the United States. Population-based incidence estimates for sporotrichosis were obtained from laboratory surveillance in the San Francisco Bay Area during 1992–1993 and suggested a yearly rate of less than one case per 1 million population.5 However, more mild infections may not be diagnosed. Sporotrichosis may be more common in other parts of the world, such as Latin America.2 For example, in the state of Rio de Janeiro, Brazil, more than 2,200 cases were reported during 1998–2009.6 Another study suggested a rate of 48 to 60 sporotrichosis cases per 100,000 population in the south central highlands of Peru.7

In the United States, sporotrichosis outbreaks have occurred among people who touched sphagnum moss or hay, such as forestry workers,8,9 tree nursery and garden center workers,10-12 and people who worked with or played on hay bales.13-16 Sporotrichosis outbreaks also have been reported in several other countries, including Australia, Brazil, China, Guatemala, and South Africa.2 Healthcare providers who are concerned about an unusual number of new cases should contact their state or local public health agency.

An ongoing outbreak of sporotrichosis is occurring in some cities in Brazil, where the infection has become common in outdoor cats and can spread to humans through bites or scratches. Learn more about this problem.