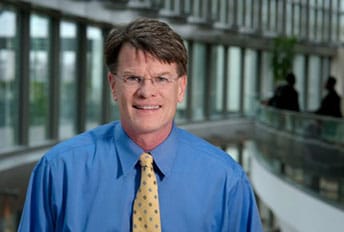 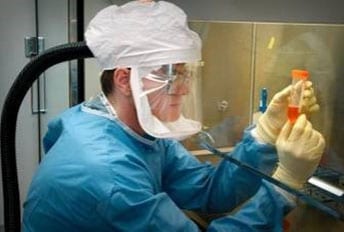 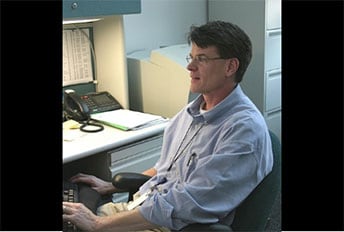 Dr. Terrence Tumpey is a microbiologist and chief of the Immunology and Pathogenesis Branch (IPB) in the Centers for Disease Control and Prevention’s Influenza Division. He’s perhaps best known for his groundbreaking work reconstructing the 1918 pandemic influenza virusexternal icon. In 1918, this virus was responsible for the pandemic that is estimated to have killed at least 50 million people worldwide. In 2004, Dr. Tumpey was the first to physically reconstruct, or “rescue” the 1918 virus, using reverse genetics to build an H1N1 virus with all the same genes as the pandemic virus. After the reconstruction was completed, Dr. Tumpey was the first person to study the live 1918 H1N1 virus in the laboratory.

In his role as the branch chief of IPB, Dr. Terrence Tumpey oversees work that advances scientific understanding of flu viruses, particularly work that helps in the understanding of virus and host factors that can impact virulence and transmission of flu viruses. This work is important for seasonal flu, but is also very informative for pandemic preparedness. “When a novel flu virus is detected, our role is to characterize it quickly… determining how much disease it causes in animals, and how well it transmits. This is important information that helps us to understand how a new flu virus could impact people,” says Dr. Tumpey. That information is then used to inform a risk assessment, which in turn impacts pandemic preparedness policy and practice.

“The influenza pandemic of 1918 was a unique event,” says Dr. Tumpey. The 1918 virus killed at least 50 million people around the world, making it the worst infectious disease pandemic in recent history. Dr. Tumpey explains, “Scientists were dealing with many unknowns in 1918, and what added to the confusion was the erroneous belief that the pandemic was caused by a bacterium called ‘Pfeiffer’s bacillus,’ which is now known as ‘Haemophilus influenzae.’ It wasn’t until the 1930s that scientists would learn that influenza is caused by a virus. But for decades after that, it was still a mystery as to whether the 1918 pandemic was caused by flu or another infectious disease agent, and if it was flu, which flu virus was it?”

In 1951, Johan Hultin, a Ph.D. microbiologist student at the University of Iowa, made a first attempt to recover the organism that caused the 1918 pandemic. That year, Hultin traveled to a remote Alaskan village called Brevig Mission, where in 1918 most of the village’s inhabitants had died as a result of the 1918 pandemic. The bodies of the victims of the 1918 pandemic were buried together in a mass gravesite, which was frozen in permafrost. Hoping those frozen remains would yield the source of the 1918 pandemic, Hultin obtained permission to excavate the burial site and obtain samples. His initial attempt failed; but 46 years later, at the age of 72, Hultin made a second attempt which succeeded. Hultin shared the samples with researchers at the Armed Forces Institute of Pathology (AFIP). Using Hultin’s sample, as well as other samples from servicemen who died during 1918, researchers at AFIP obtained RNA of the 1918 virus and characterized it as an influenza A(H1N1) virus. Over several years, the research team at AFIP fully sequenced the genome of the 1918 virus. Using the completed sequence, another group of scientists at Mount Sinai created circular pieces of its DNA called plasmids. The plasmids for the 1918 virus were then sent to the CDC, where Dr. Tumpey inserted them into human kidney cells and used reverse genetics to reconstruct the complete 1918 virus. As part of the reverse genetics process, plasmids are placed into cells, where they instruct the cells to produce a complete RNA virus. Once the 1918 virus was fully reconstructed using this method, Dr. Tumpey and colleagues studied the live 1918 virus in the laboratory under strict biosecurity precautions, so as to better understand what made the 1918 virus so deadly and to inform global public health efforts to prepare for future pandemics. The 1918 virus created for these experiments has since been destroyed as a safety precaution.

Lessons Learned from the 1918 Virus Reconstruction

The work conducted by Dr. Tumpey and his CDC colleagues provided new information about the properties that contributed to the virulence of the 1918 virus. Dr. Tumpey says, “The HA and PB1 virus genes of the 1918 virus are essential for maximum replication and virulence.” Tumpey’s work has been critical to evaluating the effectiveness of current and future public health interventions, which could be used in the event that a 1918-like virus reemerges. The knowledge from this work has also helped shed light on the pathogenesis of contemporary influenza viruses with pandemic potential.

“One reason the 1918 virus is important and still relevant today is because it contributed some of its virus genes to subsequent influenza pandemics,” says Dr. Tumpey. “For example, the 2009 H1N1 pandemic virus was a distant descendent of the 1918 pandemic virus. So this was a virus we think was always important to study and try to understand why did it cause so much disease, why did it transmit so much?”

What about the next influenza pandemic worries Dr. Tumpey the most? “I think with any of these viruses that are circulating in mammals, there’s quite a few subtypes that we really have to be careful of,” says Dr. Tumpey. “H2 may come back. That was the hemagglutinin of the virus that caused the 1957 pandemic. I think we also really have to be concerned about some of the bird flu viruses that we see in Asia that are jumping from birds to humans and causing severe disease. If one of those viruses somehow figured out a way to spread efficiently from human to human, then we would have another pandemic on our hands,” says Dr. Tumpey.

Learn more about Dr. Tumpey and this groundbreaking work in his Ask a CDC Scientist interview and the reconstruction of the 1918 influenza virus webpage.