Newborns with symptoms of conjunctivitis (pink eye) should see a doctor right away.

Symptoms and Causes of Conjunctivitis in Newborns 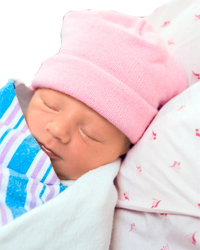 Newborns with conjunctivitis develop drainage from the eyes within a few days to several weeks after birth. Their eyelids become puffy, red, and tender. The cause of neonatal conjunctivitis is often difficult to determine because, in many instances, the symptoms don’t vary by cause.

Conjunctivitis in a newborn may be caused by a blocked tear duct, irritation produced by the topical antimicrobials given at birth, or infection with a virus or bacterium passed from the mother to her baby during childbirth. Even mothers without symptoms (asymptomatic) at the time of delivery can carry and pass bacteria or viruses to babies during birth.

The most common types of neonatal conjunctivitis include the following:

Prevention and Treatment of Conjunctivitis in Newborns

To prevent neonatal conjunctivitis, most states have laws requiring  providers to put drops or ointment in a newborn’s eyes, typically within 2-3 hours of birth. In the past, hospitals used silver nitrate; now hospitals mostly use antibiotic eye drops, typically erythromycin. During pregnancy and prior to giving birth, women with genital herpes should consult with their physician about ways to minimize the chances of spread to their newborn baby.

Doctors may treat neonatal conjunctivitis caused by a bacterial infection with antibiotics. It will depend on the severity of the infection and the bacteria that caused it. Some antibiotics are applied as an eye drop or ointment in the eye (topical). Other antibiotics are given by mouth (orally), through a vein (intravenous), or as a shot (intramuscular). Doctors may treat a newborn’s conjunctivitis with a combination of topical, and either oral, intravenous, or intramuscular antibiotics. Rinsing the newborn’s infected eye with a saline solution will remove any debris that may develop in response to the infection.

Treatments for the common causes of neonatal conjunctivitis are as follows: