The VEHSS team conducted a review of published literature on examination-based population studies reporting the prevalence of vision impairment and blindness.

Vision impairment (VI) is generally determined by measuring the best-corrected visual acuity (BCVA) of the better-seeing eye. Most studies in the United States measure visual acuity at a distance of 20 feet using the standardized Snellen Eye Chart.(Segre, 2015) Autorefractors may also be used to assess visual acuity and to estimate lens prescription. BCVA is a person’s best distance vision while using optimal refraction correction (eye glasses, contact lenses, laser surgery).(Segre, 2015) There is no universal definition of visual impairment and there are varying definitions of BCVA, including 20/40 to 20/63 (mild VI), 20/80 to 20/160 (moderate VI), 20/200 or worse (severe VI).(Varma, 2004) Legal blindness is defined by the US government (to determine eligibility for vocational training, rehabilitation, schooling, disability benefits, low vision devices, and tax exemption programs) as 20/200 or worse, and by the World Health Organization as 20/400 or worse.

There were 12 studies published between 1995 and 2016 that examined the prevalence of vision impairment and blindness.

The high degree of variation among the results in each figure is likely due to in part to methodological, disease definition, and population differences among the studies. These figures are intended to illustrate the range of published prevalence values; direct comparison of the studies is impossible without considering the underlying differences in the studies. Detailed results from each individual study are available in the full report “Published Examination-based Prevalence of Major Eye Disorders.” 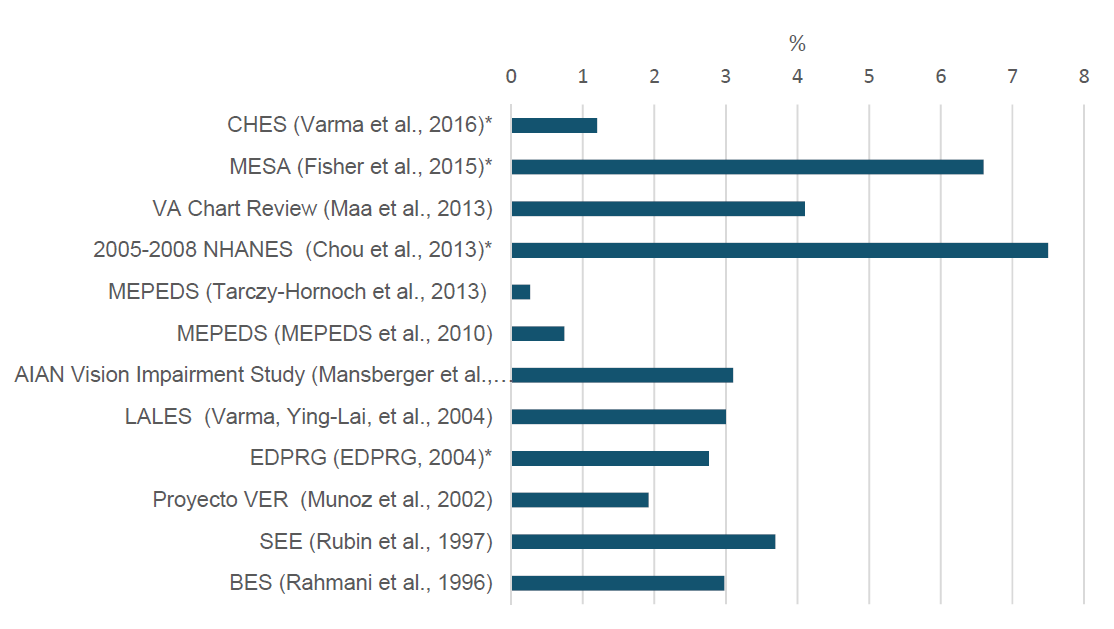 *Adjusted prevalence rate.
**Blindness is defined by the U.S. government definition of best-corrected visual acuity of 20/200 or worse.