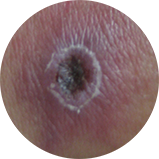 R. parkeri is closely related to R. rickettsii, the causative agent of Rocky Mountain spotted fever (RMSF). R. parkeri rickettsiosis and RMSF have similar signs and symptoms, including fever, headache, and rash, but also typically include the appearance of an inoculation eschar (seen at right) at the site of tick attachment. Eschar is not common in cases of RMSF.

R. parkeri rickettsiosis is transmitted by Gulf Coast ticks in the southeastern and mid-Atlantic states, as well as parts of southern Arizona.

R. parkeri rickettsiosis is characteristically less severe than RMSF and almost always associated with an inoculation eschar (ulcerated, necrotic lesion) at the site of tick attachment. Several days after an eschar appears, the following can develop:

NOTE: R. parkeri rickettsiosis can be difficult to distinguish from RMSF and other spotted fevers, especially during early stages of these diseases. Eschars are uncommonly identified in persons with RMSF.

CONFIRMATION OF THE DIAGNOSIS IS BASED ON LABORATORY TESTING, BUT ANTIBIOTIC THERAPY SHOULD NOT BE DELAYED IN A PATIENT WITH A SUGGESTIVE CLINICAL PRESENTATION.

NOTE: IgM antibodies are less specific than IgG antibodies and are more likely to generate false positives. IgM results alone should not be used for laboratory diagnosis.