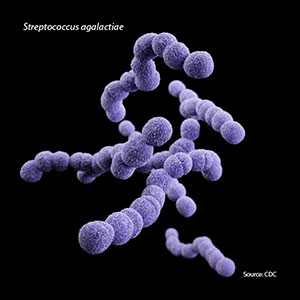 Group B Streptococcus (group B strep) or S. agalactiae is a species of bacterium that causes illness in people of all ages. Also known as GBS, this bacterium is a common cause of severe infections in newborns during the first week of life. More recently, experts recognized the increasing impact invasive GBS disease has on adults.

GBS are currently divided into ten serotypes based on type-specific capsular antigens and are designated as Ia, Ib, II, III, IV, V, VI, VII, VIII, and IX. There are multiple methods to perform GBS serotyping:

You can use a molecular approach using a real-time PCR assay targeting the cfb gene (CAMP factor) for detecting S. agalactiae in singleplex format or in triplex format along with other streptococcal species, S. pyogenes and S. suis. This assay(s) is useful for detection directly from clinical specimens when culture is negative or not available. Primer/probe sequences are detailed in the resources below.