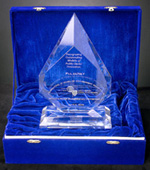 Awards PulseNet has given

The Kati Kelley award was introduced in 2008, in honor of Dr. Kati Kelley, who passed away December 29, 2007. The award recognizes a non-microbiologist who has demonstrated exceptional service to PulseNet, which includes demonstration of advocacy/outreach on the importance of PulseNet, major publications, or other material related to promotion of the network.

Background: Dr. Kelley dedicated over 40 years of her life to public health service, beginning as a microbiologist and advancing to become the Director of Public Health laboratories for the States of Alaska, Vermont, and Connecticut. She was President of the Association of Public Health Laboratories from 2005 through 2006. Dr. Kelley also served as Chief of the training branch for the Division of Laboratory Systems at CDC. One of her more important contributions to public health was her support of the PulseNet program. From spearheading the training for many early PulseNet participants to fully supporting her PulseNet staff in Connecticut, Dr. Kelley was an avid champion of PulseNet.

The PulseStar award was introduced in 1998 by what is now the Enteric Diseases Laboratory Branch (EDLB) of the Centers for Disease Control and Prevention (CDC) and the Association of Public Health Laboratories (APHL). The award serves to recognize those individuals for their outstanding contributions to PulseNet, resulting in significant improvements to the procedures or communications involved with PulseNet activities during the previous year.

As many as three awards are presented at the annual PulseNet update meeting each year by EDLB/CDC and APHL. The award itself consists of a plaque and a check for $500 provided by the Association of Public Health Laboratories.

The PulseNet Special Recognition Award is similar to the PulseStar Award but can be awarded to outstanding groups, international participants, or individuals from federal agencies such as the CDC, Food and Drug Administrationexternal icon (FDA), and U.S. Department of Agricultureexternal icon (USDA).