PulseNet by the Numbers

PulseNet is a national network of laboratories that solves outbreaks of foodborne disease. PulseNet scientists detect outbreaks—large and small—by connecting the dots between cases of similar illness that are happening anywhere in the country. PulseNet investigations have brought about lasting changes in food industry  practices and new regulations that have made our food safer.

The Story of PulseNet

“APHL is proud of its long-standing connection to PulseNet, from the first software purchases to whole genome sequencing.”

In the beginning..there were contaminated hamburgers

In 1993, more than 700 people got sick and 4 died in the western United States after eating at a large fast-food chain. More than 1 month after the first person fell ill, public health investigators identified the culprit: hamburger patties contaminated with a deadly type of E. coli bacteria. This outbreak spurred foodborne disease experts at CDC to find a way to speed up detection of foodborne outbreaks. 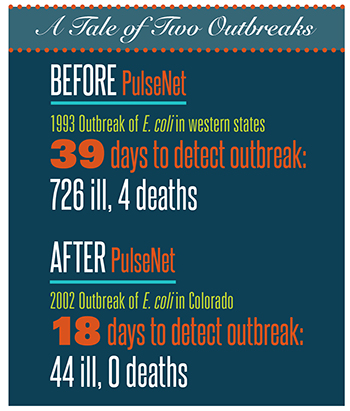 A few years later, in partnership with the Association of Public Health Laboratories (APHL)external icon, federal partners, and public health labs in 4 states, CDC created PulseNet. The goal was to create databases that would be the central repository for DNA fingerprints extracted from gut bacteria of patients with foodborne disease. Public health laboratories around the United States could submit these DNA fingerprints to PulseNet, which would be managed by CDC. When investigators searched the PulseNet databases and discovered that several ill people had bacteria with the same DNA fingerprint, they would suspect an outbreak.

Now, every state has at least one public health laboratory that uses PulseNet’s technology and can access its databases of close to 1 million fingerprints of bacteria. Because it has connected the dots between current illnesses and stored DNA fingerprints, PulseNet has revolutionized the way foodborne outbreaks are detected and investigated.

In November 2014, PulseNet scientists detected two clusters of illness (35 people from 12 states, including 7 who died) caused by the foodborne bacteria Listeria. Using traditional lab analysis methods, the scientists linked sick patients who were likely to have eaten the same contaminated food. They also used whole-genome sequencing (WGS) to more precisely determine which illnesses were linked. Armed with this information, investigators interviewed patients about foods they had eaten and identified a new source of Listeria infection: caramel apples.

Food safety requires that we pay close attention to every step in the food supply chain, from farm to fork. Diligent efforts by farmers, producers, distributors, regulators, and consumers have made the US food supply among the safest in the world. Nevertheless, an estimated 48 million people, or 1 in 6 Americans, get sick every year from foodborne illnesses. That is where PulseNet comes in.

During outbreak investigations, scientists can use PulseNet data to identify the specific type of bacteria that caused people to get sick, track down the food that was contaminated, and find out what happened to cause the contamination. For example, in the early 2000s, PulseNet traced an outbreak of Salmonella infection to raw almonds grown in California. The outbreak prompted regulators to mandate that almonds for sale in the United States be pasteurized (by fumigation or hot steam treatment) to control the problem and prevent similar outbreaks in the future.

Outbreak investigations supported by PulseNet help scientists find gaps in food safety systems that would otherwise be unrecognized. Information from PulseNet has stimulated production changes by the food industry and helped federal agencies create new or improved recommendations and regulations to make our food supply safer.

Culture-independent diagnostic tests, or CIDTs, are new tests that can detect the DNA of bacteria directly from patient samples like stool. As their name implies, CIDTs do not need a culture (cells grown in a lab) to identify the bacteria that caused a patient’s illness. Clinical laboratories are increasing their use of CIDTs because they save costs and diagnose illnesses faster.

The challenge to PulseNet

For PulseNet to work, scientists need genetic information drawn from cultures. Because CIDTs skip the step of producing a culture, these newer tests don’t produce DNA fingerprints to store in PulseNet’s database. Without these data, public health scientists will not be able to find, monitor, and prevent foodborne disease outbreaks or follow trends to know if prevention policies are working. Many outbreaks will go undetected or be detected later when the outbreak has grown, and contaminated products will remain on the market longer.

CDC is working closely with public health officials, diagnostic laboratories, CIDT kit manufacturers, and clinicians to ensure that PulseNet collects the DNA fingerprints it needs. PulseNet is also developing a new way to detect outbreaks that doesn’t depend on cultures. These innovations are in the early stages of research and development, but we are heading toward a system that answers both needs: rapid and less costly diagnosis for individuals and a way to ensure essential data are still collected.

In 2013, CDC began using whole-genome sequencing (WGS) to detect outbreaks caused by Listeria, the most deadly foodborne pathogen. WGS reveals all the genetic material, or the genome, of an organism (like bacteria and viruses) in one efficient process. The Listeria project was one of the first to receive support from CDC’s Advanced Molecular Detection (AMD) initiative, a program that uses newer, more powerful, pathogen detection technologies to find outbreaks sooner. CDC is partnering with other federal agencies and state and local health departments to analyze Listeria from human cases and possible food sources.

Since the Listeria project began, scientists have detected more clusters, solved outbreaks faster with fewer cases, linked cases to likely food sources, and identified Listeria in unexpected foods, such as caramel apples and ice cream. CDC is quickly expanding the use of WGS in state laboratories and has begun using WGS for investigations of other foodborne pathogens such as Campylobacter, E. coli, and Salmonella. WGS has been a game changer for outbreak detection, spurring innovation and new discoveries. With WGS and PulseNet working in tandem, we have taken a significant  leap forward in making food safer to eat.