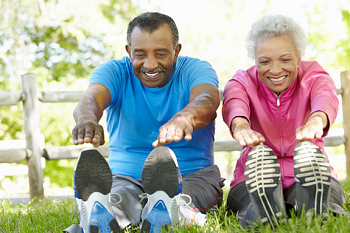 The decline in strength, endurance, flexibility, and balance that occurs with aging contributes to diminished independence, diminished vitality, and increased likelihood of disabling injury.

Context
After years of research showing that exercise leads to improved physical function and reduced disability in older adults, researchers at the University of Washington’s Health Promotion Research Centerexternal icon, a CDC Prevention Research Center (PRC), addressed the feasibility and effectiveness of offering an exercise program in the setting of a community senior center.1

Methods & Results
An exercise program for community-dwelling older adults was announced at the Northshore Senior Center affiliated with Senior Services (SS), located in Seattle, Washington. Volunteers were randomly assigned to a control group (no special program) or an intervention group that was enrolled in an exercise program consisting of 1-hour classes that met 3 times a week for 6 months. The sessions were conducted by a trained instructor and included balance, strength, aerobic, and flexibility exercises. The control group did not receive any special services, but participants were eligible to attend the exercise classes after completion of the pilot study. Over the 6 months, the intervention group improved in physical, emotional, and social health scores, and the control group deteriorated in these measures, indicating that the exercise classes led to significantly better (by 10%-30%) health status for the exercise group.1

People who participated in Enhance Fitness at least once per week had significantly fewer hospitalizations (7.9% fewer ), and lower health care costs (by $1,057) than non-participants, according to one analysis of Medicare enrollees.

Consequences
Group Health Cooperative (GHC, a large Seattle-based health maintenance organization [HMO]) began offering participation in this program as a free benefit to all its Medicare enrollees in 1998. In the first two years, more than 1,000 of its enrollees participated in the program.

Recognizing the wisdom of making the program sustainable by adapting it for community-based administration and dissemination, the PRC continued its partnership with GHC and SS. SS obtained funding from the local Area Agency on Aging to make the program available to community-dwelling seniors via senior centers. Working with its partners, SS adapted the program for local dissemination and portability by developing standards; manuals for instructors, administrators, and participants; and procedures for monitoring outcomes. The exercise program, formerly called the “Lifetime Fitness Program,” is now packaged as EnhanceFitnessexternal icon, a component of SS’s Project Enhance, which also includes a health and wellness program for older adults.

In addition to Area Agency on Aging funding for King County programs, SS receives GHC and foundation fundingto help defray the cost of the program. SS also receives funding from the National Council on Aging and CDC for managing the evidence-based data submitted by EnhanceFitness programs around the country.

Impact And Potential Impact
Attendance is tracked per class, and each participant’s physical and functional capacity is measured three times per year to monitor the program’s continued effectiveness. By June of 2010, more than 14,000 participants had taken EnhanceFitness classes, and the program was available at more than 486 sites in 25 states, plus Washington DC. In 2012, in order to help track program dissemination and implementation more accurately and efficiently, Senior Services launched a new online data-entry system. Also in 2012, Senior Services partnered with YMCA of the USA to license EnhanceFitness and potentially expand the program even further to 2,600 local YMCA sites. These numbers are expected to continue to rise as additional partners, such as retirement communities and private health and wellness clubs start to offer the program to their members.2

One analysis of GHC Medicare enrollees showed that people who participated in EnhanceFitness at least once per week had significantly fewer hospitalizations (by 7.9%), and lower health care costs (by $1,057) than nonparticipants.3 In a subsequent analysis, enrollees who attended EnhanceFitness an average of one visit or more per week had lower adjusted total health care costs in year one (-$1,929) and year two (-$1,784) than nonusers.4

Consistent with the research findings, EnhanceFitness is proving to be feasible and well-attended when offered in senior centers and other community-based settings.5,6 Moreover, it has been shown to be sustainable and portable when owned and managed by a community-based organization and HMO in continued partnership with a PRC. The availability of such a successful program becomes more and more pertinent as the US population ages and disability prevention among the elderly becomes a high national priority.

EnhanceFitness has received national recognition. In 2003, the National Council on Aging listed it as one of ten Exemplary Physical Activity Programs for Older Adults in the USA, and in 2005, it received an Innovation in Prevention Award from the Secretary of Health and Human Services.