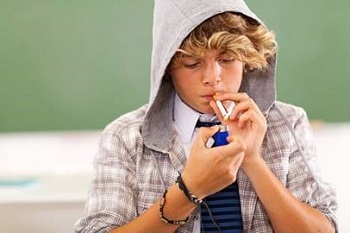 Each day in the United States, approximately 3,900 people aged less than 18 years smoke their first cigarette, and an estimated 1,000 youth become daily cigarette smokers.1 Because smokers almost always start smoking during adolescence, public health officials emphasize preventing youths from becoming addicted to tobacco. Two strategies used to prevent youth tobacco use are limiting the commercial availability of tobacco products and increasing the cost of these products by levying excise taxes.

Context
As cigarette prices increased over the past decade at retail stores, smokers began purchasing cigarettes online. The number of internet cigarette vendors (ICVs) has grown rapidly: in 2000, researchers from the University of North Carolina (UNC) Prevention Research Center identified 88 US ICVs2; each year since then, the researchers have identified up to 800 operating ICV websites.3 These vendors often do not collect the excise taxes required by law, which deprives governments of revenue, some of which may be used for tobacco control programs and cancer screening. Furthermore, verifying the age of online customers may be difficult or easily avoided, making internet sales of cigarettes a potential option for underage smokers. Online cigarette sales threaten to undermine success in decreasing the prevalence of tobacco use in the United States.

Methods and Results
Using specially developed internet search algorithms, UNC researchers identified US-based websites selling cigarettes online. After parental consent was received, 4 nonsmoking adolescents aged 11 to 15 years, under supervision of the researchers, made 83 attempts to purchase cigarettes from 55 ICVs located in 12 states.4 The youths paid for their purchases using either credit cards marketed to teenagers or money orders they bought with money provided by the researchers. The cigarettes were delivered to their homes for 76 (92%) of the purchase attempts. Although 91% of the websites displayed a warning that cigarette buyers needed to be at least 18 years old, age was not verified for any of the home deliveries. Most (86%) of the packages were left on the purchaser’s doorstep and no one in the home was contacted. Only 8 of the packages had exterior labels suggesting that the contents were tobacco products.

Consequences and Potential Impact
Other studies conducted by the team showed that none of the vendors complied with federal tax reporting laws, and many vendors advertised selling cigarettes “tax free.” ICVs often sell from Indian reservations, low-tax jurisdictions, or overseas duty free zones. As a result, only a small portion of the taxes have been collected, which makes the online prices much lower than those for in-store sales.5

Data from the ICV studies showed that nearly all internet cigarette sales transactions violated either taxation or youth access laws. In 2005, the US Bureau of Alcohol, Tobacco, Firearms and Explosives and several state Attorneys General used information from the studies to negotiate with credit card companies to ban all transactions with ICVs. Several major credit card companies voluntarily agreed to cease these transactions given that the credit card companies’ own rules do not allow them to facilitate illegal transactions. In addition, the bureau and the Attorneys General reached an agreement with three of the largest private shipping carriers to stop delivering cigarettes to US consumers. These actions by credit card and shipping companies interfere with the ability of the ICVs to conduct their business and may substantially reduce internet cigarette sales.

The ICV research brought the regulation of internet cigarette sales to the attention of many state and federal legislators, and 33 states passed laws regulating Internet and mail-order cigarette sales. At the federal level, the Prevent All Cigarette Trafficking (PACT) Act (Public Law 111-154) was signed into law on March 31, 2010. The PACT Act aims to curtail the sale of cigarettes and other tobacco products over the internet and through the mail. A key rationale discussed in the legislation was that ICVs sold cigarettes to minors. One of the Senate sponsors of the PACT Act cited the ICV Study in letters to members of Congress.

The ICV study continues and is currently examining the effects that the 2005 credit card and shipping bans have had on the internet cigarette sales industry.