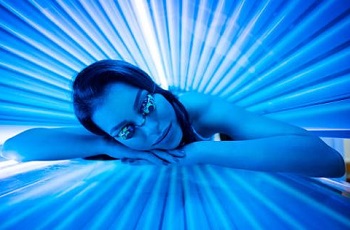 Learn about two Prevention Research Centers’ discovery of indoor tanning use among college students and steps they took to raise awareness.

Indoor tanning exposes users to intense ultraviolet (UV) radiation, which damages the skin and can lead to skin cancer, including melanoma—the deadliest type of skin cancer. According to some research, tanning salons tend to exist in areas with a greater number of girls and women aged 15-29 years and are particularly concentrated near colleges. Those who begin indoor tanning during adolescence or early adulthood have a higher risk of getting melanoma. Individuals who tan more frequently also have higher risks of melanoma. Melanoma results in nearly 9,000 deaths every year.

Researchers from the University of Massachusetts found that out of the top 125 universities listed in the US News and World Report, 15 allowed indoor tanning on campus. This number represented a combined undergraduate student body of more than 520,000. Fifty-three universities offered indoor tanning in off-campus housing and 19 referred students to these housing facilities through their website.

To raise awareness about university agreements with tanning businesses, Denver researchers published a letter to the editor in the Journal of the American Academy of Dermatology. The research letter urged universities to end their organizations’ student ID/debit card programs with indoor tanning salons. As a result of the research letter, other organizations also raised concerns. For example, the Melanoma Foundation worked with partners to reach out to the 18 universities about taking steps to end their practices.

After the letter was published, Denver researchers wrote to encourage senior leaders in universities’ dermatology and oncology departments, cancer centers, and student health services, and wrote to the university president, vice president, and general counsel directly.

Next Steps: Raising Awareness Together

Understanding the risk of indoor tanning exposure is crucial to protecting ourselves and our loved ones. Everyone can play a part to help reduce the use of tanning devices—especially on or near college campuses—and the rising number of skin cancer and melanoma cases.

Know the facts about indoor tanning, including its risks, and share them with your friends and families.

The Prevention Research Centers Program is made up of 26 centers associated with schools of public health or with a medical school that has a preventive medicine residency program. PRCs work with at-risk communities to promote health and prevent chronic diseases such as cancer, heart disease, and diabetes.