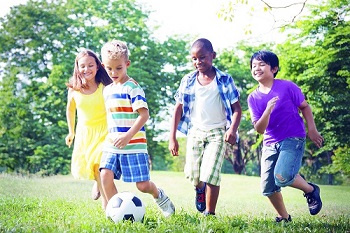 During the past 2 decades, childhood obesity has steadily increased in the United States, and the increase in childhood diabetes is alarming. These changes have highlighted the importance of developing and disseminating effective programs to increase physical activity and improve diet among children and to coordinate health messages in schools and communities.

The Coordinated Approach To Child Health (CATCH) program was designed in the 1980s to improve physical activity and diet and to prevent the onset of tobacco use.1 Researchers at The University of Texas Health Science Center at Houston (UTHealth), in conjunction with experts from Tulane University, the University of California at San Diego, and the University of Minnesota, developed an interdisciplinary program for elementary schools, under the auspices of the National Institutes of Health (NIH). The intent is to improve a whole set of environmental influences to support behavior change, both inside and outside of school.

Study with low-income Hispanic and African American students in Travis County, Texas showed an 8% reduction in overweight and obesity among fourth graders.

An evidence base supports the program’s efficacy in improving diet and increasing physical activity and preventing the onset of obesity in children. In 1992, a 3-year randomized controlled trial* of the CATCH program in 56 intervention and 40 control elementary schools in 4 states (Texas, Minnesota, California, and Louisiana) resulted in children significantly increasing time (from 40% to 50%) spent in moderate to vigorous physical activity within physical education classes, as well as significantly decreasing consumption of fat (from 39% to 32%) in school meals. According to follow-up surveys, the significantly increased physical activity and reduced fat intake persisted over 3 consecutive years without additional intervention.

In 1999, results of long-term CATCH follow-up study indicate that changes in diet and physical activity in the original cohort were maintained 3 years post intervention, until the children were in eighth grade.

CATCH has been proven effective in promoting health among inner-city, border, rural, privileged, and underprivileged children. A school randomized replication study of CATCH in El Paso, Texas found significant effects in reducing the rate of increase of overweight and risk of overweight among a cohort of children in grades 3–5. By fifth grade, the rate of increase was 2% for girls and 1% for boys in intervention schools, compared with 13 and 9%, respectively, in control schools.  Based on positive results, the El Paso region, with funding from Paso del Norte Health Foundation, conducted a community wide implementation of CATCH; data from the School Physical Activity and Nutrition (SPAN) survey found a 7% reduction in child obesity prevalence in the El Paso region from 2000–2002 (prior to CATCH implementation) to 2004-2005 (after CATCH implementation).2

In 2010, a demonstration study of CATCH with low-income Hispanic and African American students in the Travis County area showed an 8 percent reduction in overweight and obesity among fourth graders.3  According to a 2007 cost-effectiveness study of CATCH, the program’s cost effectiveness ratio was approximately $900 (representing the intervention cost per quality-adjusted life-year saved), and the net benefit was $68,125 (based on a comparison of the present value of averted future costs due to obesity with the cost of the CATCH intervention).4

The CATCH collaboration became motivated to educate policymakers in Texas, which resulted in the development and passage of Senate Bill 19 in 2001 mandating that all elementary schools have a coordinated school health program by 2007,5 and Senate Bill 42,6 extending SB19 to include middle schools (grades 6–8).

CATCH is proving to be sustainable and feasible in a wide variety of settings. The program provides hands-on training and is designed to minimize the burden on teachers and school staff. The program has been adapted for low-income communities in the United States and dissemination is well underway. Interest continues to grow.

In 2014, the CATCH Global Foundation was formed to assume the maintenance and distribution of the CATCH platform, lead future program development, and support greater dissemination in economically disadvantaged communities. The Foundation is a 501(c)3 public charity and provides CATCH schools and communities with implementation training, technical support, evaluation assistance, assistance with locating and writing grants, community publicity, and other services. Since its inception, the Foundation has guided more than 100 new CATCH implementations, impacting over 150,000 children.