The major clinical syndromes of pneumococcal disease are pneumonia, bacteremia, and meningitis. Researchers do not clearly understand the immunologic mechanism that allows disease to occur in a carrier. However, disease most often occurs when a predisposing condition exists, particularly pulmonary disease, and, if it is going to occur at all, shortly after colonization. 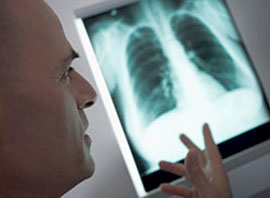 A clinician examines a chest x-ray of a patient with pneumonia.

Pneumococcal pneumonia is the most common clinical presentation of pneumococcal disease among adults. Pneumonia without bacteremia or empyema is not considered to be “invasive” disease. The incubation period of pneumococcal pneumonia is short, about 1 to 3 days. Symptoms generally include an abrupt onset of fever and chills or rigors. Typically, there is a single rigor, and repeated shaking chills are uncommon. Other common symptoms include

An estimated 5,000 cases of pneumococcal bacteremia (without pneumonia) occur each year. The overall case-fatality rate for bacteremia is about 20% but may be as high as 60% among elderly patients. Patients with asplenia who develop bacteremia may experience a fulminant clinical course.

With the decline of invasive Haemophlius influenzae type b disease, S. pneumoniae has become the leading cause of bacterial meningitis among children younger than 5 years old in the United States. Before routine use of pneumococcal conjugate vaccine, children younger than 1 year old had the highest rates of pneumococcal meningitis, approximately 10 cases per 100,000 population.

Pneumococci are a common cause of acute otitis media, causing up to 20% of those infections. By age 12 months, more than 60% of children have had at least one episode of acute otitis media. Middle ear infections are the most frequent reasons for pediatric medical visits in the United States, resulting in more than 18 million visits annually, and the most common reason that children receive antibiotics. Complications of pneumococcal otitis media may include mastoiditis and meningitis.