Whooping Cough is Deadly for Babies 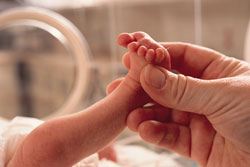 Whooping cough is a very contagious disease that can be deadly for babies. It spreads from person to person, usually by coughing or sneezing while in close contact with others.

Your baby could be at risk for getting whooping cough

Even though it seems like these are a lot of cases, the United States no longer has the 200,000 cases per year like it did before whooping cough vaccines were available.

Even healthy babies get whooping cough 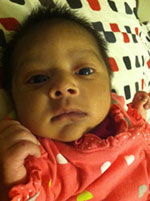 Read a true story about a baby who got whooping cough…

In the first 6 months of life, babies are at high risk for complications from whooping cough, even if they are healthy. This is because their immune systems are still developing. In fact, babies younger than 2 months of age only have the antibodies they get from their mother to help protect them. It is important for you to get the whooping cough vaccine during each pregnancy. This allows you to transfer the greatest number of protective antibodies to each of your babies.

Whooping cough can be serious for you, your baby, and your family

Whooping cough can cause serious and sometimes life-threatening complications in babies. This is especially true within the first 6 months of life. It is important to know that many babies with whooping cough don’t cough at all. Instead it causes them to stop breathing and turn blue. About half of babies who get whooping cough end up in the hospital. The younger the baby is when she gets whooping cough, the more likely it is that doctors will need to treat her in the hospital. Of those babies who get treatment for whooping cough in a hospital, about 1 out of 4 will get pneumonia and 1 or 2 out of 100 will die. Other complications include violent, uncontrolled shaking, life-threatening pauses in breathing, and brain disease.

View photos of a baby being treated for whooping cough.

View videos of a child and an adult with whooping cough.

Doctors generally treat whooping cough with antibiotics (medications that help treat diseases caused by bacteria). Learn why early treatment is so important and get tips for caring for your baby.

Your doctor or local health department may recommend preventive antibiotics to close contacts of a whooping cough patient, including all household members. This might prevent or reduce the chance of getting whooping cough.